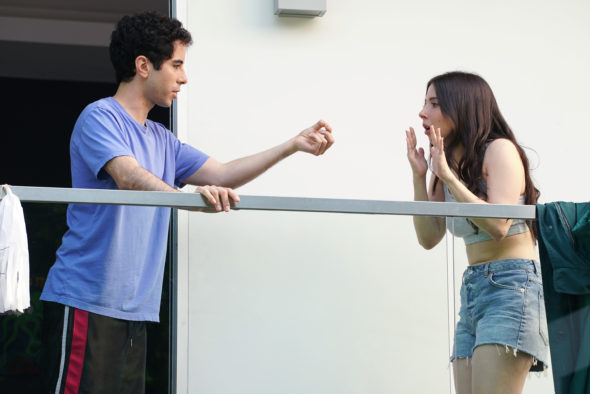 Esther and Benji are back. Recently, Freeform announced season two of Alone Together will premiere in August.

The comedy centers on two millennials. Everyone thinks Esther (Esther Povitsky) and Benji (Benji Aflalo) should be a couple, but they’re simply platonic best friends.

Season two of Alone Together premieres on Freeform on August 1st at 8 p.m. ET/PT.

reeform’s buddy comedy “Alone Together” returns for its 10-episode, second season on WEDNESDAY, AUGUST 1, with all-new back-to-back episodes at 8:00-8:30 p.m. and 8:30-9:00 p.m. EDT. The Lonely Island executive produced series will run for five weeks with two brand-new episodes debuting each week. The second season will feature a roster of stellar comedic acts as well as continuing to follow the platonic, dysfunctional co-dependent, best friendship of series executive producers, stars, and writers Esther Povitsky and Benji Aflalo.

“We are so excited for the upcoming second season of this hilarious show, and we guarantee that season two of ‘Alone Together’ will make the total amount of available episodes DOUBLE,” said Andy Samber, Jorma Taccone and Akiva Schaffer of The Lonely Island. “That’s The Lonely Island Second Season Guarantee™.”

Despite their sometimes contentious relationship, when push comes to shove, Esther and Benji have each other’s back … and they have nobody else to hang out with. In season two, their odd friendship continues to baffle everyone around them, as they continue to find their place in Los Angeles, juggling odd jobs, their love lives, and aspirations of social status. Freeform will give viewers a sneak peek of the first four episodes across all Freeform digital platforms and Hulu beginning July 25, and then will make the full season available starting August 1.

Joining the cast as guest stars in season two are Fran Drescher (“The Nanny”) as Mary, Esther’s perfectly coiffed, tastefully made up, Mom; Carmen Electra (“Baywatch”) as Tia, a beautiful and mysterious woman who seduces Benji; Natasha Leggero (“He’s Just Not That Into You”) as Nora, a poised and successful woman that Esther meets at the gym; Hana Mae Lee (“Pitch Perfect”) as Gigi, a wild partying goth who meets Benji at a concert; Danny Pudi (“Community”) and Abby Elliott (“Saturday Night Live”) as husband and wife Chris and Megan, whose boringness is thrown off by Esther and Benji’s eccentricity; Nicole Sullivan (“black-ish”) as Becky, a writer that has to work with Esther and Benji; writer, director, and actress Kay Cannon (“Blockers”) as television AD Danielle, who displaces Benji; Maz Jobrani; Andrew Santino; Seth Morris; Erik Griffin; and more. Punam Patel (“Adam Ruins Everything”) also joins season two for a recurring role as Tara, Esther’s friend from acting class six years ago.
Returning for season two are appearances by Chris D’Elia (“Undateable”) reprising his role as Benji’s older brother Dean; Ginger Gonzaga (“Wrecked”) as Benji’s older sister Alia; Edgar Blackmon (“Popstar: Never Stop Never Stopping”) as Benji and Esther’s friend, Jeff; and Nikki Glaser (“Note Safe with Nikki Glaser”) as Annette.

What do you think? Have you seen Alone Together? Will you watch season two?

I won’t be shocked if Freeform cancels this show after this season.