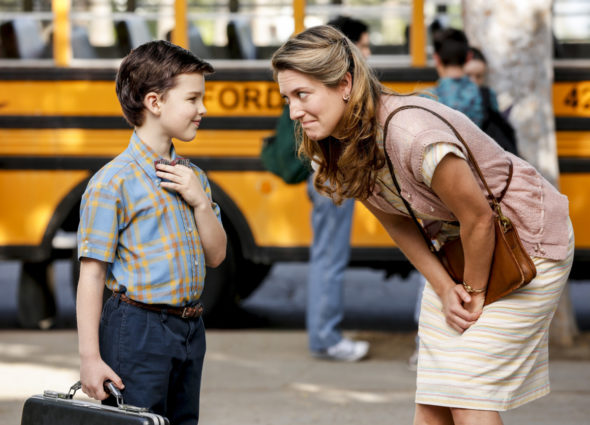 Will nine-year-old Sheldon Copper make it through high school unscathed? Has the Young Sheldon TV show been cancelled or renewed for a second season on CBS? The television vulture is watching all the latest TV cancellation and renewal news, so this page is the place to track the status of Young Sheldon, season two. Bookmark it, or subscribe for the latest updates. Remember, the television vulture is watching your shows. Are you?

Airing on the CBS television network, Young Sheldon stars Iain Armitage, Zoe Perry, Lance Barber, Annie Potts, Montana Jordan, and Raegan Revord, with Jim Parsons narrating. The single-camera sitcom comes from creators Chuck Lorre and Steven Molaro. The Big Bang Theory prequel unfolds in 1989 and centers on Sheldon Cooper (Armitage), when he was just a nine-year-old boy. Surviving childhood in an East Texas outpost — one dedicated to all things faith and football — will be no mean feat for this unique genius and his otherwise ordinary family.

The first season of Young Sheldon averaged a 2.21 rating in the 18-49 demographic and 12.52 million viewers. Find out how Young Sheldon stacks up against other CBS TV shows.

Although it premiered with very high numbers, it is still just a bit too early to use the ratings to predict whether CBS will cancel or renew Young Sheldon for a second season. Flying blind, my famished gut says this prequel to The Big Bang Theory will — like the original series — mock my hunger and score an early second season renewal. For now though, I’ll keep a hungry eye on the ratings and update this page with breaking developments. Subscribe for free updates on any Young Sheldon cancellation or renewal news.
1/6/18 update: CBS has renewed Young Sheldon for a second season for the 2018-19 season. Details here.


What do you think? Are you glad that the Young Sheldon TV show has been renewed for a second season? How would you feel if CBS had cancelled this TV show, instead?

Love this show, hope it repeats and repeats. And please do not kill dad off or anyone else! It’s terrific as is. Not much great to watch on TV so this one is definitely a keeper.

Absolutely the best show, all the actors are perfectly cast. I hope in this case young sheldon doesn’t grow up. It’s a great family show, something we haven’t seen in a while on tv..

I love the show! It’s poignant and thoughtful.

I don’t know what’s worst: the acting or the acting. Canx.

meh, the second episode was annoying as hell anyways, wont be devastated if this show leaves TV. the kid was cute, though.

I don’t even think they gave the show a chance the only thing is I don’t remember Sheldon having a older brother if not they can take him out other than that I thought it was pretty interesting to watch Sheldon grow up and to what he is now on The Big Bang Theory so yes I would like it back on I was very upset the following episode never aired.

This was absolutely the worst show I’ve seen in at least a decade. Terrible concept, poor acting, horrible story

After what I saw renewed