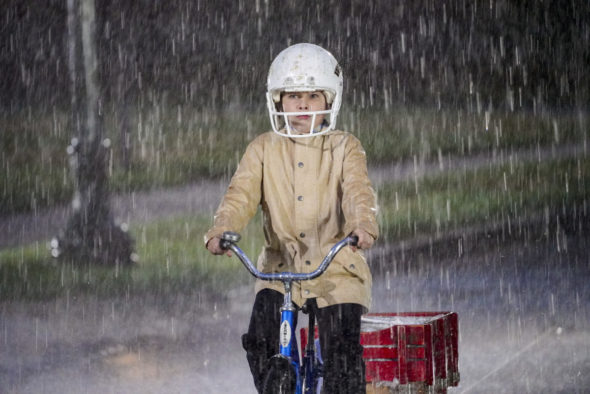 What does the future hold for Sheldon Cooper? Is the Young Sheldon TV show cancelled or renewed for a third season on CBS? The television vulture is watching all the latest TV cancellation and renewal news, so this page is the place to track the status of Young Sheldon, season three. Bookmark it, or subscribe for the latest updates. Remember, the television vulture is watching your shows. Are you?

A CBS comedy, Young Sheldon stars Iain Armitage, Zoe Perry, Lance Barber, Annie Potts, Montana Jordan, and Raegan Revord, with Jim Parsons narrating. Season two of The Big Bang Theory prequel unfolds in 1990 and centers on Sheldon Cooper (Armitage), as a 10-year-old boy. Surviving childhood in an East Texas outpost — one dedicated to all things faith and football — is no mean feat for this unique genius and his otherwise ordinary family.

The second season of Young Sheldon averaged a 1.71 rating in the 18-49 demographic and 11.14 million viewers. Compared to season one, that’s down by 23% and 11%, respectively. Find out how Young Sheldon stacks up against the other CBS TV shows.

To be honest, I don’t see the Young Sheldon series going anywhere, especially with The Big Bang Theory ending this season. Sheldon will be renewed. I’ll keep an eye on the Nielsens and update this page with breaking developments. Subscribe for free Young Sheldon cancellation or renewal alerts.

What do you think? Are you glad that CBS has renewed its Young Sheldon TV show for seasons three and four? How many more seasons do you think this TV series has in it?

This show should be an abomination to any true Big Bang Theory fan. I cant put into words my true disgust with their decision to cast Leonard’s bully from season 5 of BB, as young sheldon’s dad. What’s Even worse was when they decided to do a season 12 episode that painted his dad in a better light, even showing a VHS tape recording of his dad, or Leonard’s bully to inspire Sheldon. So yeah they ruin big bang for a show that won’t make it to season 5. Out of all the actors in the world, this was the… Read more »

Young Sheldon over stepped its boundaries tonight with trying to remove under God from the pledge. I will no ;onger be watching that show.

Keep this show, it is one of the few shows that can be watched without guns, sex , cussing and mayhem. it is enjoyable and one I can allow children to watch. Sheldon is a breath of fresh air . Thoroughly enjoyable!

Young Sheldon series is fantastic. Why is it on only for 30 minutes instead of 1 hr? I hope you’ll give consideration to going to an hour. Thank you so kindly!

I love the show Young Shelton. Please keep it for many years. Great actors.
Kathy P.

Please CANCEL Young Sheldon. Why watch a a spin off of a show Jim Parsons produces when he’s leaving the original? Young Sheldon isn’t funny and will be less funny once parent show is off the air.
That is only my opinion

young sheldon sucks ass, cancel the big bang thats all this is stop remaking shows and think of new ideas

I really liked this very funny show, until watching the halloween show. It was disgusting. No longer watching it. Sad that your writers thought it was good. Are they aware that children are part of the audience?

Keep it going, WAY too funny to cancel. Family comedy is few and far between, we love it and need it. We’re hooked on this show.

I would be so upset if this show cancels. I love young Sheldon. Funny an love the family . Not like big bang but still love it!! Plz don’t cancel out my favorite show!!