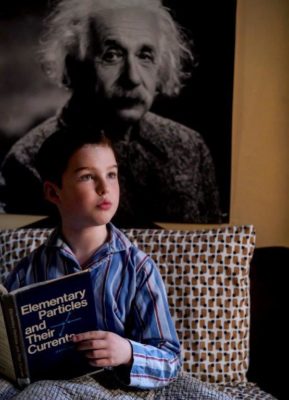 The Big Bang Theory sitcom may be ending but the character of Sheldon Cooper will be on CBS for at least a couple more years. CBS has renewed their Young Sheldon TV show for two more cycles — season three (2019-20 season) and season four (2020-21 season).

A prequel to Big Bang Theory, the show is currently the network’s second-highest rated shows in the 18-49 demographic and sits in third place in viewers. It will be interesting to see how Young Sheldon fares next fall when it doesn’t have Big Bang Theory as a lead-in.

“Thanks to Chuck Lorre’s and Steve Molaro’s outstanding creative leadership, YOUNG SHELDON has been a powerful performer for the Network with an audience that towers over most of the television landscape,” said Kelly Kahl, President, CBS Entertainment. Added Thom Sherman, Senior Executive Vice President of Programming: “The Coopers are portrayed by an amazing cast, and we are looking forward to having the gifted writing staff mine even more of Sheldon’s hilarious backstory and the warm family dynamic that has made this comedy a favorite with audiences for the past two seasons.”

What do you think? Do you enjoy the Young Sheldon TV show on CBS? Are you glad that it’s been renewed for season three and season four?

I hope they let Young Sheldon grow and progress for a few more years. It fills the big hole left by BBT.

Yes! I’m so so so glad there will be a season 4. I hope it stays on forever. Love Young Sheldon. Miss The Big Bang. Sorry but TV shows know stinks. They don’t make TV shows like they use to. Like The Golden girls, Cheers, Dynasty, Sinfeld, And I can name more. Man the Big 80s…. Miss that year so much…. I’m so glad I was Born in the 80s…

Jimmie Gambino, I couldn’t agree more. I love Young Sheldon and all the older sitcoms from the 80’s. I can’t wait for Young Sheldon to return to the airwaves. I love the entire cast and often marvel at the ingenious cohesion of this funny and loveable family.

This is a very funny show with a fine ensemble

So happy YS is renewed for 2 more seasons! I just love this sweet , funny show. My family and I enjoy it so much, as it’s one of the very few clean family shows on tv today. Every character is hilarious in their own very different styles. Annie Potts, as always, is a spitfire delight. An all around good time , old fashioned show, without the issues of today’s society.

I tried watching this show, it’s not funny or cute.

I csmt believe anyone actually watches this Turkey.

This show is great. I don’t watch a lot of comedies, except for “The Big Bang Theory” and “Young Sheldon.” The prequel is hilarious and heart warming. They are starting to develop the other characters and all the actors are up to it. My wife and I really like “Memaa’s” boyfriend. The boy who plays Young Sheldon is fantastic, I hope he is on of those rare child actors that is successful as an adult.

I am absolutely thrilled that YOUNG SHELDON has been picked up for 2 more seasons. It doesn’t need the BIG BANG THEORY to succeed by following it. It’s already a hit all on it’s own. Plus there will be lots of BIG BANG re-runs being played.
Young Sheldon is a REALLY funny show. Keep it going & going! This last show was hilarious!

Young Sheldon is a great show and doesn’t need Big Bang for it’s lead in. Big Bang started sliding down with FAKE CHILDREN! Biggest mistake ever!