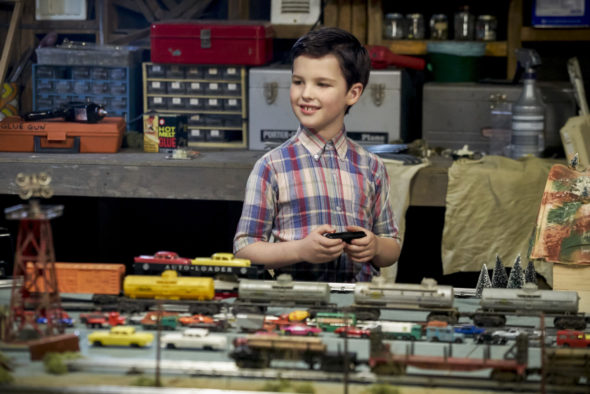 The Big Bang Theory may be ending soon, but Young Sheldon is keeping its legacy alive. TVLine reports the season two finale of Young Sheldon will feature a crossover between the two CBS TV shows.

The season two finale of Young Sheldon debuts on CBS on May 16th at 9 p.m. ET/PT and will reportedly feature young versions of Leonard, Penny, Howard, Raj, Amy and Bernadette.

The episode will follow the series finale of The Big Bang Theory at 8 p.m. ET/PT.

What do you think? Do you watch The Big Bang Theory and Young Sheldon? Would you watch another spin-off?

Big Bang could continue without Sheldon and Amy

Actually, we got tired of Big Bang after one season. We really like Young Sheldon, however!

I’m in total agreement with the others. I’ll miss BBT & am glad Young Sheldon has been renewed. The characters on Young Sheldon are fantastic actors & the show is really funny.
The idea of seeing all the BBT characters as children in outstanding! Yes, more spin offs please.

Yes, my wife and I will continue to watch ‘Young Sheldon’ and we would like to see a few spin off shows based on the other cast characters as well. We are sad that ‘The Big Bang Theory’ is ending as well. We were hoping to see Amy and Sheldon start a family as well as the other characters from the show. Also, we enjoyed seeing the cast at the comic book store with Stuart. Thanks for some fun episodes on ‘The Big Bang Theory’ and ‘Young Sheldon’. We look forward to any New shows based on ‘The Big Bang… Read more »

I love both Big Bang and Young Sheldon.
I’m saddened that Big Bang is leaving, my husband and I dvr every season every episode and just keep watching them. They are a part of our lives!
I would like to see another spin off, but nothing will compare to the bazingas!

Would love to see another spinoff!!! Love these 2 programs!!! I am sad that the Big Bang is ending