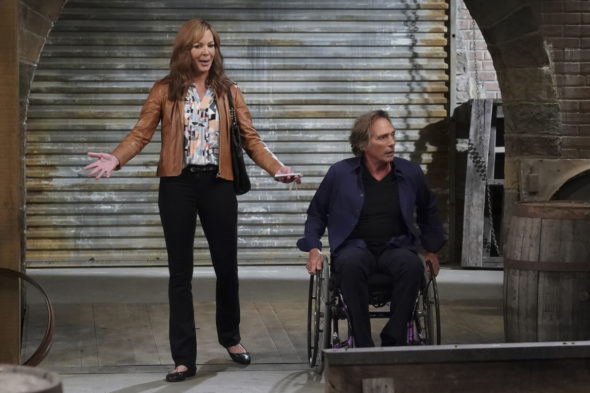 What does the future hold for Christy and Bonnie Plunkett? Is the Mom TV show cancelled or renewed for a seventh season on CBS? The television vulture is watching all the latest TV cancellation and renewal news, so this page is the place to track the status of Mom, season seven. Bookmark it, or subscribe for the latest updates. Remember, the television vulture is watching your shows. Are you?

A CBS sitcom, Mom stars Anna Faris, Allison Janney, Jaime Pressly, Mimi Kennedy, Beth Hall, and William Fichtner. The series centers on Christy (Faris), a single mom in recovery who has moved back in with her own single mother, Bonnie (Janney), who’s also in recovery. Bonnie’s attempts to make up for her failings can try Christy’s patience. After all, she’s working on her relationships with her own kids. Meanwhile, Bonnie is learning how to forge healthy relationships and still wonders what she’ll be when she grows up. Together, and with the help of AA, Christy and Bonnie spot one another along the road to recovery.

The sixth season of Mom is averaging a 1.20 rating in the 18-49 demographic and 7.99 million viewers. Compared to season five, that’s down by 18% and 9%, respectively. Find out how Mom stacks up against the other CBS TV shows.

Will CBS cancel or renew Mom for season seven? The ratings are down a bit but I am inclined to think it will be renewed, rather than cancelled. That’s providing that the stars want to continue. Since that’s just speculation, I’ll keep an eye on the Nielsens and update this page with breaking developments. Subscribe for free updates on any Mom cancellation or renewal news.

What do you think? Should the Mom TV show have been renewed for seasons seven and eight? How long would you like this CBS TV series to last?

Why do you have to cancel Mom. I think it’s a better show and just as funny without Ann Faris Please keep MOM on the air.

Please don’t cancel this show, mom is one of the best and funniest shows, I watch all 152 over and over. I want more. Please air them soon. I would live to meet the cast, me, my kids and my grandkids are just exactly like them. Id give it a 10+. Thank you cindy

I have loved this show since day one, I have all 152 episodes recorded and watch them over and over. In this day and time, we need something to make us laugh and warm our hearts. Please keep it running. There will be a lot of unhappy people if you don’t. Thank You

Please do not cancel this show . It’s about the only sitcom left that’s worth watching. My daughter and I watch every week , and every re-run we can find. Thank you , and please keep up the good times.