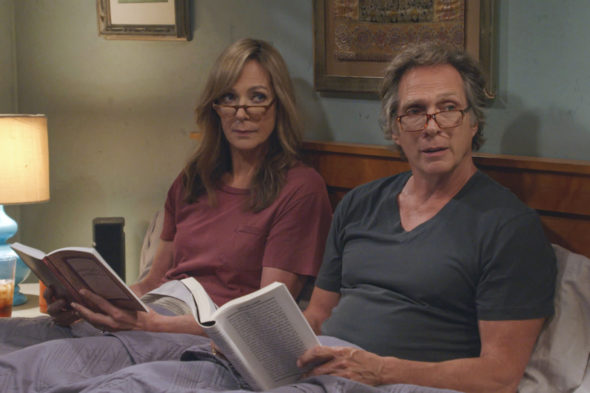 Will Christy and Bonnie stay on track? Has the Mom TV show been cancelled or renewed for an eighth season on CBS? The television vulture is watching all the latest cancellation and renewal news, so this page is the place to track the status of Mom, season eight. Bookmark it, or subscribe for the latest updates. Remember, the television vulture is watching your shows. Are you?

Airing on the CBS television network, the Mom TV series stars Anna Faris, Allison Janney, Mimi Kennedy, Jaime Pressly, Beth Hall, William Fichtner, and Kristen Johnston. After years of questionable choices, Christy (Faris) is now sober and has her life mostly back on track — although she’s often tested by her mother, Bonnie (Janney), who’s also a recovering addict. These days, Christy is well on her way to becoming a lawyer, while Bonnie is in a healthy romantic relationship and has just gotten married to Adam (Fichtner). Through it all, Bonnie and Christy rely on their support system from AA, including the wise Marjorie (Kennedy), wealthy Jill (Pressly), overly emotional Wendy (Hall), and Bonnie’s foster sister, ex-con Tammy (Johnston). Though dysfunctional, this family sticks together and helps each other no matter what life may throw their way.

The seventh season of Mom is averaging a 0.79 rating in the 18-49 demographic and 6.27 million viewers. Compared to season six, that’s down by 34% and 21%, respectively. Find out how Mom stacks up against other CBS TV shows.

You don’t have to worry about Mom being cancelled for a while. CBS has already renewed the sitcom for an eighth season. I’ll still keep an eye on the ratings anyway and update this page with breaking developments. Subscribe for free alerts on Mom cancellation or renewal news.

What do you think? Do you hope the Mom TV show will be renewed for an eighth season? How would you feel if CBS cancelled this TV series, instead?

Warner Brothers owns the CW why can’t Mom which is owned by Warner Brothers TV why can’t it be renewed there, or NBC or ABC or Fox through out the years , sitcoms that were cancelled got picked up by another network , Get Smart , Taxi, Sabrina the teenaged witch, My Three Sons, Hazel. etc. etc. etc. Think about it ,CBS’s Loss should be somebody’s else’s gain. If the tv series the Conners can be renewed without Roseanne , why can’t you RENEW MOM for another season. It’s a much better tv series. good writing believable writing , great… Read more »

It is the dumbest move CBS is making.. I have less and less to watch on CBS because they keep canceling my favorites. Put MOM on another channel!!

Please! Please! Do NOT cancel MOM! Best show about women and relationships, honesty and life! It’s uplifting! Timely! Current! Funny! Sweet! And it’s fine without Anna Faris. Maybe better, in fact. The point is, it really is just such a wonderful show. I never have a feeling of “man I couldve missed that episode” moment. They’re all perfect in their imperfect ways. SAVE MOM! SAVE MOM! SAVE MOM! I’m going to start a movement!

I agree. Since Anna Faris left “MOM”, the show has been 100% better. It is funny without having an adult woman whining. all of the time.

I love mom it inspires me , because a awhile ago I’ve dealt with drinking wishing I loved to go to AA with women who are close friends and helping one another ,, would love to see it keep going ..

Yes I truly believe the show “mom” should continue. Anna Faris is a real inspiration to me. Not only do we look like twins, as well I left the acting industry for 12 years and I wasn’t going to go back until I heard Anna state to never give up on your dreams.