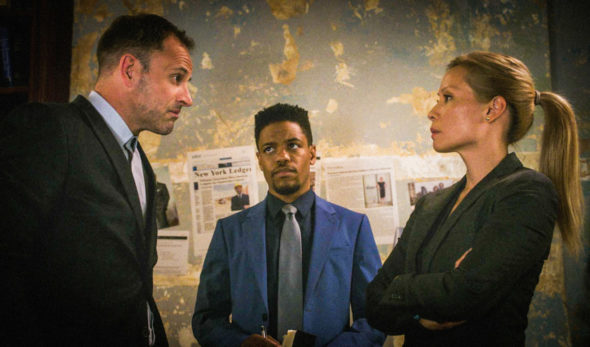 Will Holmes and Watson return to New York? Is the Elementary TV show cancelled or renewed for an eighth season on CBS? The television vulture is watching for all the latest TV cancellation and renewal news, so this page is the place to track the status of Elementary, season eight. Bookmark it, or subscribe for the latest updates. Remember, the television vulture is watching your shows. Are you?

A CBS detective drama based on the classic Sir Arthur Conan Doyle characters, Elementary stars Jonny Lee Miller as detective Sherlock Holmes and Lucy Liu as Dr. Joan Watson. The cast also includes Aidan Quinn as Captain Thomas Gregson and Jon Michael Hill as Detective Marcus Bell, with James Frain joining the seventh and final season as Odin Reichenbach. The story centers on Holmes and Watson, as they investigate the trickiest crimes. Season seven kicks off in London, with Holmes and Watson serving as consultants for Scotland Yard.

The seventh season of Elementary is averaging a 0.41 rating in the 18-49 demographic and 3.12 million viewers. Compared to season six, that’s down by 15% and 18%, respectively. Find out how Elementary stacks up against the other CBS TV shows.

You don’t have to worry whether CBS will cancel or renew Elementary for season eight, because the network previously announced this is the final season. Could it be revived? Subscribe for free Elementary news alerts.

What do you think? Is season seven the right time to end the Elementary TV series for season seven? If it were up to you, would this CBS TV show be cancelled or renewed for an eighth season?

Please give us more seasons. Probably the best reason to have Amazon prime

Elementary is definitely in my top 3 fav shows of all time. I absolutely love the entire cast. Alot of viewers really connect with them. I’ll be so sad to say goodbye to Sherlock, Joan, the Captain, and Marcus. It was a really bad decision to end the show. Especially with such a short final season. It felt rushed and unfinished. Please bring the show back! Catching up with the cast after everything that happens in season 7, where they are now and the new adventure to come. Just an idea. Please bring them back!

Please don’t cancel Elementary tv show! I’ve watched for so long , ld like to keep watching it. Nothing else is like it.

Please make more seasons of Elementary, I’ve watched the show probably 10 times and I can watch it 10 more, but new season will be incredible

KEEP ON GOING WITH A NEW SEASON OF ELEMENTARY..A SUPERB SERIES

I love the show
Please don’t cancel it

Fantastic show until she bleached her hair and was no longer the confident Joan. Didn’t even look like the same person. She was trying to be “something” else and was a serious turn off. So, dark hair, I’d watch again but try hard blonde… Can’t watch that. Amazing show til then. Watched every episode on AppleTV so I paid for each one, not via cable.

Great show should not be canceled.!!!!! Ratings for advertising always controls everything great show loved it. ala SG1 , STARGATE ATLANTIS. among others

very sad to see it cancelled…I guess CBS doesnt know a good show when they see one.

It isn’t just CBS, they would rather warp minds with the likes of family guy, the old man wearing a diaper, smoking a cigar, and cussing as though he was working on the wharf.America loves filth it entertains young ordinances so the parents don’t have to.The same with the half nude murderous video games..teaches kids to smoke dope, and die, it is alright they say they do it on the movies.

Great show! I’m very disappointed that it has been canceled and not understanding why. I started watching Elementary just 5 months ago and watched every episode all 7 seasons. Best entertainment I’ve seen on TV in a long time.

Elementary has been a show I never wanted to miss. Loved watching him go through the details and adding them up to a conclusion. Very interesting. I really hope the show comes back on. Far too many shows are not worth watching. ELEMENTARY IS INTERESTING AND WORTH WATCHING.

Elementary is one of the best shows airing. It is a shame that this is the last season. I hope CBS changes it’s mind and keeps the show on. I have watched it since the first episode and never missed an episode.

When does season 7 begin? They have already filmed all the episodes, so what’s the hold-up?