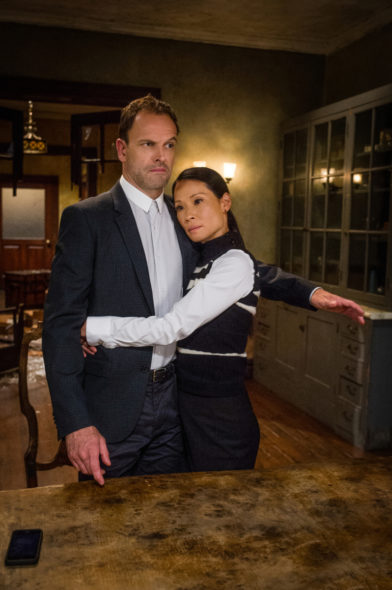 Are Sherlock Holmes and Dr. Joan Watson making all the right deductions during the sixth season of the Elementary TV show on CBS? As we all know, the Nielsen ratings typically play a big role in determining whether a TV show like Elementary is cancelled or renewed for season seven. Unfortunately, most of us do not live in Nielsen households. Because many viewers feel frustration when their viewing habits and opinions aren’t considered, we’d like to offer you the chance to rate all of the Elementary season six episodes here.

A CBS detective drama based on the classic Sir Arthur Conan Doyle characters, Elementary stars Jonny Lee Miller as detective Sherlock Holmes and Lucy Liu as Dr. Joan Watson. The cast also includes Aidan Quinn as Captain Thomas Gregson and Jon Michael Hill as Detective Marcus Bell, with Desmond Harrington in the role of Michael. This updated take on the detective story centers on Holmes and Watson, as they help the NYPD investigate the trickiest crimes in New York City.

What do you think? Which season six episodes of the Elementary TV series do you rate as wonderful, terrible, or somewhere between? Should CBS cancel or renew Elementary for a seventh season? Don’t forget to vote, and share your thoughts, below.

You cancel good shows like Elementary but leave shows like Life In Pieces on. What a shame.I actually change channels when Life comes on.

BRING IT BACK…..THE ONLY INTELLIGENT SHOW ON TV…THANK YOU VERY MUCH

This season was the best of all. Please don’t cancel this show. It is much better than the other brainless shows; has plot, character development and continues to improve. Thank you.

I love the show. It has great cases that need to be solved and Holmes & Watson are an excellent team. Jonny Lee Miller as detective Sherlock Holmes and Lucy Liu as Dr. Joan Watson are fantastic in their character roles. I am hopeful that the show will continue for several more seasons.

I love this show. the Networks seem to cancel the shows that are very good and keep silly shows. What is that!

While the BBC has turned Sherlock into a babe magnet w Benedict Cumberbatch I am so PLEASED that our Sherlock, Jonny Lee Miller, remains a curmudgeon w a sociopathic personality. In the pilot episode he was made to look CUTE. Now he’s dressing the same way each day–although my heart skipped a few beats seeing him in a tux! James Bond! I am happy that he and his dad Morland Holmes the GREAT John Noble are getting somewhat closer…although who actually knows what is happening w Mycroft. Lucy Liu is just NOT realistic….to me. The way that she dresses–must have… Read more »

Love this show. Makes you think, which does not seem popular with stations. I thought someone was trying to kill it by moving it around and pulling episodes. Now is detective Bell being moved? Stop messing with it! Doyle was popular for years. Cannot the writers keep up?

Spoiler Alert. Marcus Bell has accepted going to US Marshalls’ Academy in ~6 months after he finishes his Master’s in Criminology. Captain Gregson gave him the OK…that he would miss him, but would be so PROUD of his advancement. Both Bell and Gregson had tears in their eyes.

Love Elementary. Why is it on in the summer and not the regular season? I forget it and luckily can watch On Demand. It’s light here until 10:00 pm and we are outside. Please give this show a regular time slot.

CBS has NFL football on, so Elementary starts up after American Football is now on Saturday, Sunday, Monday, and Thursday nights. I think they are stopping the Thursday night football games. (BTW there are MANY who feel that American Football, NFL–as compared to futbal–soccer–will be gone in 5-10 years. 110 out of 111 brains biopsied of former NFL players showed CTE–Chronic Traumatic Encephalopathy) that causes severe depression, suicidal AND homicidal actions, early dementia, violent outbursts and complete changes in personality. As a trauma doctor I don’t see how ANY responsible parent would allow their child to play. Basketball, swimming, tennis,… Read more »

So happy to see Elementary back on the air. Often times the network moving a show around to different days and times leads to their decision to cancel. Put in a time slot that there is another dominant show and if doesn’t work gone rather then move it back to day and time it was doing well. I marvel at network decisions anyhow (networks their own worst enemy). Love Elementary, a favorite.

Watched it from the first. It has taken turns I did not expect, and has left things behind that I wish it had kept. I was surprised it was brought back. I thought they had killed it. Glad it is back. Keep it.

Great job on showing, in a realistic way, how a head injury effects people. Hopefully they will also include the Captains wife, who has Multiple Sclerosis, in the storyline as it has a myriad of the same symptoms, and it wouldn’t be far fetched to bring her back.
I love Elementary and look forward to watching it again every week, no matter what night it is on!

I’m an MD and Sherlock’s Post Concussion Syndrome (PCS) and the Captain’s wife’s Multiple Sclerosis (MS) are COMPLETELY different neurological diseases! PCS almost always resolves completely as no nerves are permanently damaged. MS cannot be cured. The insulation of the nerve fibers degenerates thus causing short circuiting of the nerves. There are different types–one the patient goes down rapidly and dies from paralysis of breathing and generalized nerve damage. Two, the symptoms will get worse, then become pretty normal–a rollercoaster. Three the patient SLOWLY gets worse but the nerves are damaged and they do NOT heal, so patient will die.… Read more »

I pray Elementary has many more Seasons to come! I LOVE it!

Elementary is loved by many. CBS moving it around every other week Season 5 did it no justice. This show will 4ever be locked into many minds and hearts. Reality shows are for no minds, many of us feel this way. Chemistry between the characters makes or breaks a show. Elementary is amazing and loved by millions!

Love this show ! one of the best. Instinct is just as wonderful