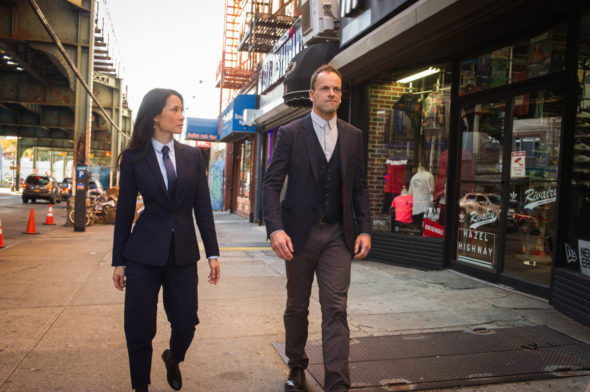 What’s in store for the end of Elementary? Recently, star Lucy Liu spoke with The Wrap about the seventh and final season of the CBS TV show.

In the interview, Liu said she felt “joyous” about the final 13 episodes of Elementary:

I didn’t shed a tear, because the joys that came out of this show were the kind that I don’t know that I would’ve thought possible doing other shows and other movies. I just felt so happy. Is that strange? I felt joyous.”

Later, Liu revealed the final season of the CBS series will further explore Joan’s desire to start a family:

I think she definitely continues to struggle with it. It’s something that I know a lot of women friends of mine also struggle with. That sense of “I’m so in the flow right now, is it a good time for me to stop and go into this?” It’s a very modern sort of thing to be concerned about. So it’s something that comes up in Season 7, and I was glad for it. Because like I was saying, it was important to me to delve into her personal life more and not give up on that, or say that [starting a family] was out of the picture just because she made a choice about it before. I’m glad Rob was able to continue that story and not just let her turn into somebody who doesn’t even think about it. Because I’ve had friends who decided not to have children, but they did at some point think about it, you know? So I think that’s an honest assessment of what it means to prioritize your career.”

Elementary airs on CBS on Thursdays at 10 p.m. ET/PT.

What do you think? Are you a fan of Elementary? How do you want the series to end?

Elementary was a show my wife Pat and I really enjoyed watching together!!…It was exciting, an adventure of good vs. evil, had a great cast as well as great writers!!’n…But just like a number of US stations, it gets cancelled…how depressing…Our US stations should start learning from Canadian and English series, and if they are great…keep them!!!!!!

I am so happy that CBS is letting this show have an ending instead of just cancelling it. I am glad that CBS is showing enough respect towards their viewers. I enjoyed the show and I am happy that we will get an ending. I hope that The Enemy Within came move over to CBS.

I enjoy the odd relationship between Holmes & Watson. I think it should end with them being partners in business who are acknowledging their close relationship. And plan to explore whether they should consider a romantic partnership in a very Holmes like proposal of such an idea….scientific- like.! Make it a teaser in the very ending episode.

I love this show and will be very sorry to see it end!! They play their parts so well!!

I’d be happy to continue watching even without Lucy Liu’s character. Might freshen up the series if she were gone.

The shows is ending and not because of her so I don’t understand what your trying to say really.

Grace is referring to her character ending and wanting to pursue something else Mike. The fact that the show can go on without her in it. It wouldn’t be ideal but it would still work.

Will miss the show and the cast greatly.

Will miss this show. It’s one of the few shows I continue to watch. Sorry it has to end.

I have really enjoyed Elementary. What I don’t understand is when did less than 20 episodes constitute a season?

LOL. You mean pretty much every cable show? Or how about all the network shows..

I really enjoy the show I also wish they would reconsider renewing it.

Sorry to see it end. My favorite show. Great actors and writing. Unfortunately it’s spot will probably be filled by a game show or fake reality show.

Great show! Love it! I wish it wasn’t ending! Would be nice if some other network picked it up!

Love this show! I’m sad to see it end. I wish CBS would renew. It’s much better than some they already renewed!!!

I would rather not see the series end. I don’t understand why anyone would want to give up a good career to start a family? Some people do handle both a career and family but I think it would be very challenging. Maybe her husband could be a stay at home dad.

I guess you didn’t read the article…. where did it say anything about LUCY LIU starting a family?? Your confusing the character with reality..