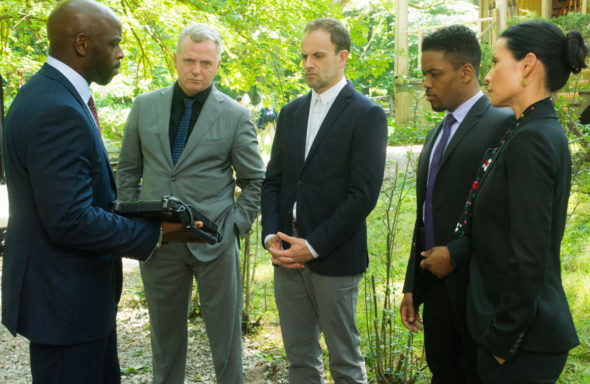 Will Holmes and Watson be back on the case? Is the Elementary TV show cancelled or renewed for a seventh season on CBS? The television vulture is watching all the latest TV cancellation and renewal news, so this page is the place to track the status of Elementary, season seven. Bookmark it, or subscribe for the latest updates. Remember, the television vulture is watching your shows. Are you?

A CBS detective drama based on the classic Sir Arthur Conan Doyle characters, Elementary stars Jonny Lee Miller as detective Sherlock Holmes and Lucy Liu as Dr. Joan Watson. The cast also includes Aidan Quinn as Captain Thomas Gregson and Jon Michael Hill as Detective Marcus Bell, with Desmond Harrington in the role of Michael. This updated take on the detective story centers on Holmes and Watson, as they help the NYPD investigate the trickiest crimes in New York City.

The sixth season of Elementary averaged a 0.48 rating in the 18-49 demographic and 3.79 million viewers. Compared to season five, that’s down by 26% and 22%, respectively. Find out how Elementary stacks up against the other CBS TV shows.

The sixth season premiered with much lower numbers than last year, but it is still too early to predict whether CBS will cancel or renew Elementary for season seven. While they have more than enough episodes for a decent syndication package, this year, it feels like CBS used Elementary as its stopgap. Although they initially ordered just 13 episodes, back in late November (months ahead of the premiere), they wound up ordering an additional eight episodes, after some weak spots in the schedule became apparent. By all rights, this should be Elementary‘s final season, but I don’t have a strong feeling on its chances. I think it will depend upon the strength of the CBS development slate. For now, I’ll look to the Nielsens for a better indication and update this page with breaking developments. Subscribe for free Elementary cancellation or renewal alerts.

What do you think? Are you glad that CBS renewed Elementary TV show for season seven? How many more seasons do you think this TV series has in it?

I know my partner when I worked with Homeland Security. Us Guys called her Mrs. Sherlock Holmes, we were giving her a hard time so we thought. She would smile and took it as a compliment!After I retired and she changed professions after she was hurt in the line of duty . She kept working on some cases that she couldn’t let go without doing everything she could to bring it to conclusion,solved or as close as possible. She made me watch the show, I’m not going to tell her that I got hooked because I don’t think I’d hear… Read more »

I was trying to get another show that I really like on a different channel giving my reasons of why they should give it another season to at least wrap up some holes that fans who live the shows seam to talk about for a long time after. However I wrote more reasons for a seventh season of Elementary & I am so glad-not even the word to use-ecstatic that there will be at least one more season. I’m a huge Sherlock Holmes fan to say the least. My dog-her name is Watson & she is being trained to be… Read more »

I love Elementary but I think the show has been getting the short stick. They didn’t start the show until April giving it a summer airing. What does CBS expect (viewership)?! If I was the showrunner I would either see if another network would like to take the show or just end it. They need to let this series wrap up though.

Do not cancel this show