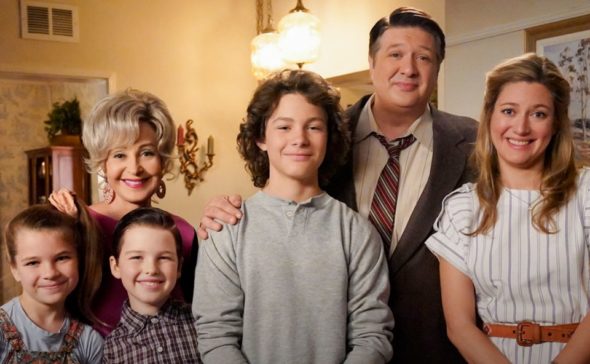 Can this show fill The Big Bang Theory’s shoes?  Has the Young Sheldon TV show been cancelled or renewed for a fourth season on CBS? The television vulture is watching all the latest cancellation and renewal news, so this page is the place to track the status of Young Sheldon, season four. Bookmark it, or subscribe for the latest updates. Remember, the television vulture is watching your shows. Are you?

Airing on the CBS television network, Young Sheldon stars Iain Armitage, Zoe Perry, Lance Barber, Annie Potts, Montana Jordan, Raegan Revord, Matt Hobby, and Jim Parsons (narration). Recurring cast members include Sarah Baker, John Hartman, and Jayne Taini. Revolving around the early life of The Big Bang Theory’s Sheldon Cooper (Parsons), this comedy series follows a gifted and naive young Sheldon (Armitage) as he navigates his way through life while living with his very normal Texas family. Sheldon’s father, George (Barber), struggles to find his way as a high school football coach and as father to a boy he doesn’t understand. Sheldon’s mother, Mary (Perry), fiercely protects and nurtures her son in a town where he just doesn’t fit in. Sheldon’s older brother, Georgie (Jordan), does the best he can in high school, but it’s tough to be cool when you’re in the same classes with your odd younger brother. Sheldon’s twin sister, Missy (Revord), sometimes resents all the attention Sheldon gets, but also remains the one person who can reliably tell Sheldon the truth. Sheldon’s beloved Meemaw (Potts), his foul-mouthed, hard-drinking Texas grandmother who is very supportive of her grandson and his unique gifts.

The third season of Young Sheldon averaged a 1.05 rating in the 18-49 demographic and 8.71 million viewers. Compared to season two, that’s down by 39% and 22%, respectively. Find out how Young Sheldon stacks up against other CBS TV shows.

CBS has already renewed Young Sheldon for season four. Though the ratings are way down, it seems very unlikely that the network would rescind that order but, if the ratings drop low enough, you never know. For now, I’ll keep an eye on the ratings and update this page with breaking developments. Subscribe for free alerts on Young Sheldon cancellation or renewal news.

What do you think? Do you hope the Young Sheldon TV show will be renewed for a fourth season? How would you feel if CBS cancelled this TV series, instead?

YOUNG SHELDON IS AT THE TOP OF MY LIST FOR a timely & youthful dialogue. I am certain that turning nine will offer a useful, youthful, & effective show. His young age and his adult insight makes for a wonderful show. Don’t go changing Sheldon. I just spoke to a young man named Oliver in New Orleans, Louisiana. He reminded me that Young Sheldon is very much on his mind; his Dad is right with him. GO SHELDON!!

‘Whole family looks forward to this show.Crisp writing, very funny, great vehicle fir Annie Potts and Craig Nelson. We care about all the characters – a show that really entertains. SO glad there will
Be a season four!!