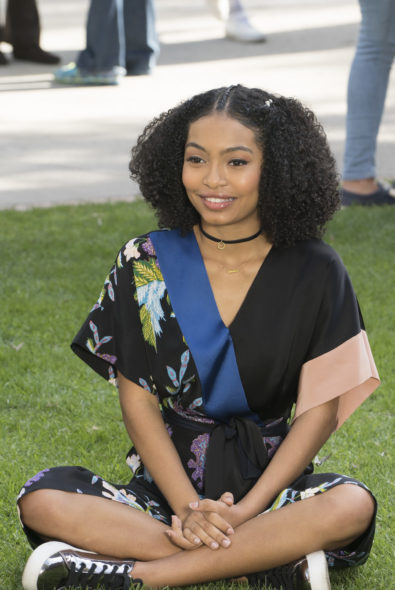 Sure, you haven’t had finals yet, but are you ready for next semester? Freeform has announced its Grown-ish TV show will debut on Wednesday, January 3, 2018 at 8:00pm ET. Although it is a half-hour sitcom, the Black-ish spin-off’s TV series premiere is a one hour episode.

FREEFORM DOUBLES DOWN ON THE LAUGHS WITH BRAND-NEW WEDNESDAY NIGHT
COMEDY BLOCK; “GROWN-ISH” KICKS OFF WITH SPECIAL

WITH ‘ALONE TOGETHER’ FOLLOWING THE WEEK AFTER ON JAN. 10

The network announced an expanded lineup with four branded nights of
original series. In addition to Freeform’s Wednesday night comedy block,
the network will roll out various programming blocks over the next few
months as outlined below:

• Monday nights will consist of unscripted originals kicking off with the
series premiere of “Disney’s Fairy Tale Weddings” in the spring.

• Tuesday nights will be dedicated to original dramas beginning Q1 with
“The Fosters,” leading into “Shadowhunters” on April 3. “The Bold Type” and
“Famous in Love” will carry out the drama block for the remainder of the
year.

“At Freeform, we are committed to our audience; and this past year, we
refined our programming strategy to be a destination for trendsetting
originals that champion youth culture,” said Tom Ascheim, president,
Freeform. “Our upcoming slate is our biggest, boldest and most diverse ever
— we look forward to making each show its own event and delivering
empowering and entertaining originals to our viewers.”

“Alone Together” stars stand-up comedians Povitsky (“Crazy Ex-Girlfriend” and named Variety’s “10 Comics to Watch in 2017”) and
Aflalo (“Not Safe with Nikki Glaser”) as two overlooked millennial misfits
from different backgrounds trying to make their way in the vain and
status-obsessed culture of Los Angeles. These two only find salvation in
their male/female strictly platonic friendship. Throughout the season
Esther and Benji’s misadventures include shooting their own music video,
standing in line for a Lip Kit Pop Up and even trying their hand at
retirement life. Regardless of the escapade, you can be sure in their own
warped way they will have each other’s backs while calling each other on
their nonsense in a way that only best friends can.

Part of the Disney|ABC Television Group, Freeform connects to audiences and
goes beyond entertainment with bold original programming and immersive
social engagement. As Disney’s young adult television and streaming
network, it delivers a unique mix of quality original and acquired series,
plus fan-favorite movies and the holiday events “13 Nights of Halloween”
and “25 Days of Christmas.” The Freeform app is a service that allows
viewers with participating TV subscription services access to 24/7 live
viewing of the network, as well as continued on-demand access via a wide
array of devices.

You can also become a fan of the shows on social media at:

What do you think? Are you a Black-ish fan? Do you plan to check out Freeform’s Grown-ish TV series? Let us know, below.

Waste time nobody wanted this.

So to say this but yes is right. And I speak for myself.