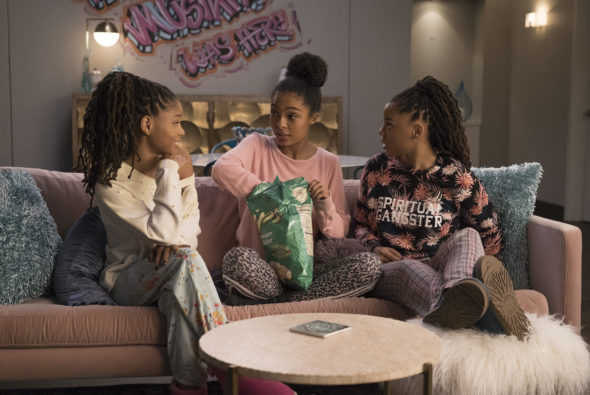 Will Zoey Johnson stay in school? Has the Grown-ish TV show been cancelled or renewed for a third season on Freeform? The television vulture is watching all the latest cancellation and renewal news, so this page is the place to track the status of Grown-ish, season three. Bookmark it, or subscribe for the latest updates. Remember, the television vulture is watching your shows. Are you?

The second season of Grown-ish averaged a 0.20 rating in the 18-49 demographic with 474,000 viewers. Compared to season one, that’s down by 27% in the demo and down by 22% in viewership. Learn how Grown-ish stacks up against the other Freeform TV shows.

Will Grown-ish be cancelled or renewed for season three on Freeform? I suspect it will be renewed but I’ll keep an eye on the Nielsens and update this page. Subscribe for free alerts on Grown-ish cancellation or renewal news.

**2/5/2019 Status Update: Grown-ish has been renewed for season three on Freeform. Details here.

What do you think? Di you predict Freeform would renew its Grown-ish TV show for a third season? How would you feel if they had cancelled this TV series, instead?