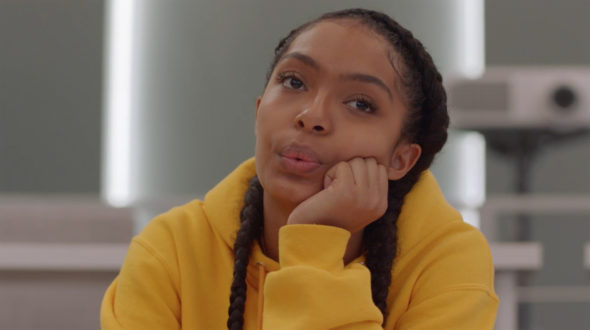 TV show description:
From creator Kendra Barris, the Grown-ish TV show is a spin-off off of ABC‘s sitcom, Black-ish. The coming-of-age comedy follows Zoey Johnson (Shahidi), as she leaves the home of her parents, Dre and Rainbow (Anderson and Ross), and heads off to college.

Pretty, popular, sociable, and more than a bit entitled, Zoey arrives at Southern California University, only to discover that spreading her wings is not as easy as she had hoped. Still, there are reminders of home at SCU, like Charlie (Cole), her dad’s Stevens & Lido colleague. Believe it or not, the mercurial oddball moonlights as an adjunct marketing professor.

At school, Zoey meets Miriam (Arlook). Although she is just a freshman, there’s nothing Miriam doesn’t know — at least to hear her tell it. Miriam seems to have plenty of attitude to spare.

Now that she is finally out, and (mostly) on her own, Zoey will find that while college can be great, the fun and excitement are not without their costs. The more she learns, the more she realizes how little she knows.

What do you think? Do you like the Grown-ish TV series? Should this TV show be cancelled or renewed for another season on Freeform?

Addicted to this show!! Fresh, light and uplifting. Please renew for season 2. It’s a show the entire family can watch!!!