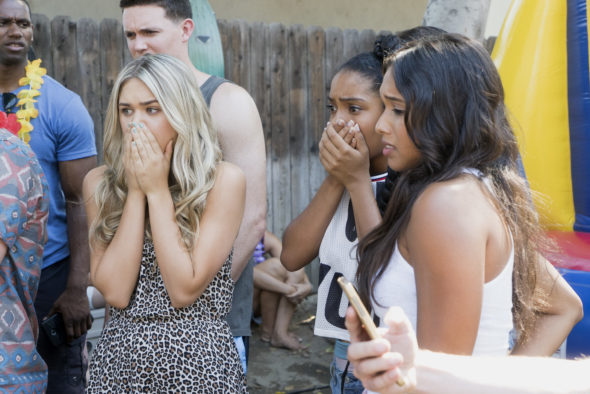 Does Zoey Johnson make the grade during the first season of the Grown-ish TV show on Freeform? As we all know, the Nielsen ratings typically play a big role in determining whether a TV show like Grown-ish is cancelled or renewed for season two. Unfortunately, most of us do not live in Nielsen households. Because many viewers feel frustration when their viewing habits and opinions aren’t considered, we’d like to offer you the chance to rate all of the Grown-ish season one episodes here.

A Freeform sitcom, Grown-ish stars Yara Shahidi, Deon Cole, Francia Raisa, Chloe Bailey, Halle Bailey, Jordan Buhat, Luka Sabbat, Trevor Jackson, Chris Parnell, and Emily Arlook, with Anthony Anderson and Tracee Ellis Ross recurring. The Black-ish spin-off centers on Zoey Johnson (Shahidi), as she leaves the home of her parents, Dre and Rainbow (Anderson and Ross), and heads off to Southern California University. Now that she is finally out, and (mostly) on her own, Zoey will find that while college can be great, the fun and excitement are not without their costs. The more she learns, the more she realizes how little she knows.

What do you think? Which season one episodes of the Grown-ish TV series do you rate as wonderful, terrible, or somewhere between? Should Freeform have renewed Grown-ish for a second season? Don’t forget to vote, and share your thoughts, below.