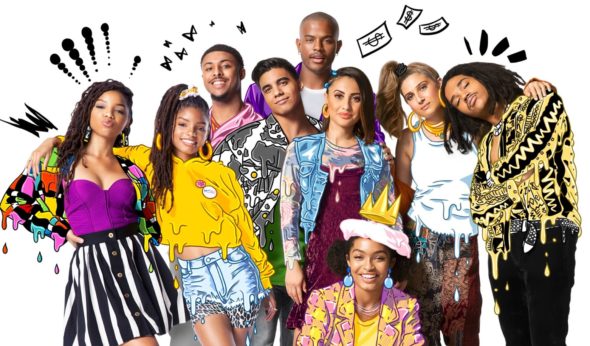 Last year, Grown-ish was Freeform’s highest-rated series. Will it continue to entertain as many viewers or, will the numbers decline this time around? Will Grown-ish be cancelled or renewed for season four? Stay tuned. *Status update below.

A Freeform teen comedy-drama series, Grown-ish stars Yara Shahidi, Trevor Jackson, Francia Raisa, Emily Arlook, Jordan Buhat, Chloe Bailey, Halle Bailey, Luka Sabbat, and Diggy Simmons. A spin-off of ABC’s Black-ish, the show follows Dre and Bow Johnsons’ eldest daughter, Zoey (Shahidi), as she goes to college and begins her journey to adulthood. However, she quickly discovers that not everything goes her way once she leaves the nest. In season three, the gang returns as seasoned upper-classmen and Zoey and her girls move into an off-campus home, ready to take on the school year. They quickly realize that they have been mistaken about the disillusionment of adulthood, with real-life problems like student loans, balancing life and work, and messy breakups.

What do you think? Do you like the Grown-ish TV series on Freeform? Should it be cancelled or renewed for a fourth season?

*1/17/20 update: Freeform has renewed Grown-ish for a fourth season.

About The reference of freeform highly rated show? That doesn’t say much for this network does it you’re a previous shows that runs the same time that got replaced yes were much higher along the demographics. Let alone were a hell of a lot better than this garbage. So it’s safe to say that this network doesn’t care about ratings but more about what they’re trying to force down peoples throats. All due respect this is not what people should be subjected to. We should be able to show by our ratings that what we really want in this isn’t… Read more »