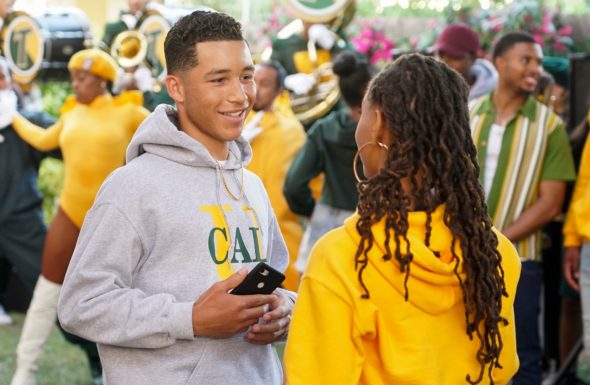 Are Zoey and her friends ready for the third season of the Grown-ish TV show on Freeform? As we all know, the Nielsen ratings typically play a big role in determining whether a TV show like Grown-ish is cancelled or renewed for season four. Unfortunately, most of us do not live in Nielsen households. Because many viewers feel frustration when their viewing habits and opinions aren’t considered, we invite you to rate all of the third season episodes of Grown-ish here. *Status update below.

A Freeform teen comedy-drama series, Grown-ish stars Yara Shahidi, Trevor Jackson, Francia Raisa, Emily Arlook, Jordan Buhat, Chloe Bailey, Halle Bailey, Luka Sabbat, and Diggy Simmons. A spin-off of ABC’s Black-ish, the show follows Dre and Bow Johnsons’ eldest daughter, Zoey (Shahidi), as she goes to college and begins her journey to adulthood. However, she quickly discovers that not everything goes her way once she leaves the nest. In season three, the gang returns as seasoned upper-classmen and Zoey and her girls move into an off-campus home, ready to take on the school year. They quickly realize that they have been mistaken about the disillusionment of adulthood, with real-life problems like student loans, balancing life and work, and messy breakups.

What do you think? Which season three episodes of the Grown-ish TV series do you rate as wonderful, terrible, or somewhere between? Do you think that Grown-ish should be cancelled or renewed for a fourth season on Freeform? Don’t forget to vote, and share your thoughts, below.

*1/17/20 update: Freeform has renewed Grown-ish for a fourth season.