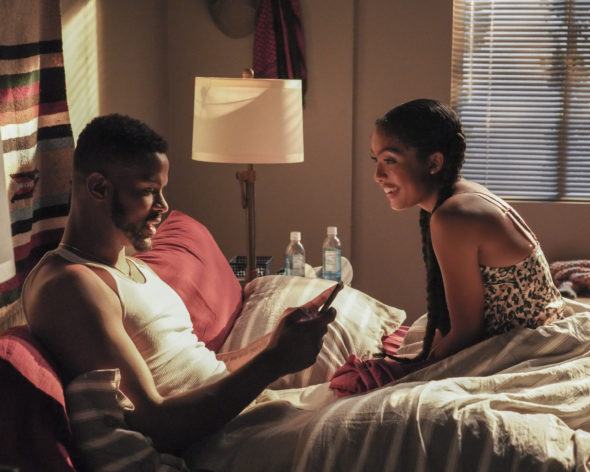 Junior has a lot to learn in the fifth season of the Grown-ish TV show on Freeform? As we all know, the Nielsen ratings typically play a big role in determining whether a TV show like Grown-ish is cancelled or renewed for season six. Unfortunately, most of us do not live in Nielsen households. Because many viewers feel frustrated when their viewing habits and opinions aren’t considered, we invite you to rate all of the fifth season episodes of Grown-ish here.

A Freeform comedy series, the Grown-ish TV show stars Yara Shahidi, Marcus Scribner, Trevor Jackson, Diggy Simmons, and Daniella Perkins. Matthew Sato, Tara Raani, Justine Skye, Amelie Zilber, Ceyair Wright, and Slick Woods recur. A spin-off of ABC’s Black-ish, the show initially follows Dre and Bow Johnsons’ eldest daughter, Zoey (Shahidi), as she goes to college and begins her journey to adulthood. In the fifth season, Zoey and her friends have graduated college. Meanwhile, her brother Andre Johnson Jr., aka Junior (Scribner) has enrolled at Cal U and embarks on his own journey to being “grown”.

What do you think? Which season five episodes of the Grown-ish TV series do you rate as wonderful, terrible, or somewhere between? Do you think that Grown-ish should be cancelled or renewed for a sixth season on Freeform? Don’t forget to vote, and share your thoughts, below.