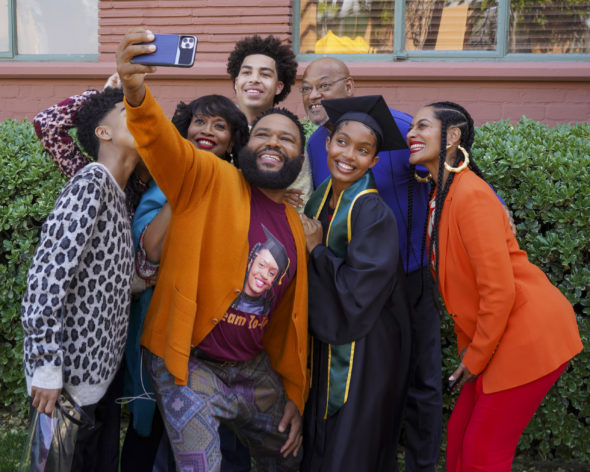 Grown-ish aired its season four finale on Freeform on Thursday night, and it was reported after the episode aired that six of the regular cast will not be returning for season five of the series. Viewers will not be seeing original cast members Francia Raisa, Emily Arlook, Chloe Bailey, Luka Sabbat, Halle Bailey, and Jordan Buhat return, per Deadline.

However, viewers will still see some familiar faces during the fifth season. Grown-ish stars Yara Shahidi, Trevor Jackson, and Diggy Simmons will be joined by Marcus Scribner (Black-ish) next season.

Zakiyyah Alexander and Courtney Lilly, Grown-ish showrunners, said the following about the departures in a statement.

“Francia, Emily, Chloe, Halle, Luka and Jordan will always be a part of the ‘-ish’ family. This new season isn’t a goodbye, we are just expanding the world; there will always be an open door for them to return. For season 5, we’re excited to dive deeper into the storylines of Zoey, Aaron and Doug in their post-grad adventures and welcome a new dynamic class to Cal-U, including Junior (Marcus Scribner).”

Other cast additions and a premiere date season five will be announced in the future.

What do you think? Are you sad to see these actors exit Grown-ish? Do you plan to watch season five of the Freeform series?

I really loved luka and zoey together! Although they were both kinda insecure they had something really special. And she is kinda all over the place and I feel like shes capable of finding her true self if she lets all her distractions go. Aka luka so fineeeee

I wish they had put Diggy and Chloe back together because she was funny but I love the show and wish nothing but the best for the cast members that are still there.

Not surprising, given the season ended with Zoey moving to NYC. Obviously everybody wasn’t going to be moving with her.

It’s basically another spin-off of the spin-off, but they’re keeping the title. Guess we’ll find out if it works….