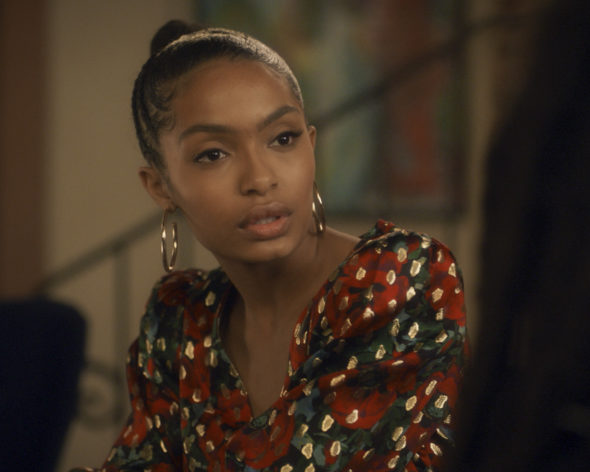 Zoey will return for more drama and education and her brother, Junior, is joining her. Freeform has renewed the Grown-ish TV series for a fifth season and Marcus Scribner will join the cast, reprising his role as Andre Johnson Jr. from Black-ish. The fourth season is currently airing and will wrap on March 24th.

A comedy-drama series, Grown-ish stars Yara Shahidi, Trevor Jackson, Francia Raisa, Emily Arlook, Jordan Buhat, Chloe Bailey, Halle Bailey, Luka Sabbat, and Diggy Simmons. A spin-off of ABC’s Black-ish, the show follows Dre and Bow Johnsons’ eldest daughter, Zoey (Shahidi), as she goes to college and begins her journey to adulthood. However, she quickly discovers that not everything goes her way once she leaves the nest. In season four, Zoey and the gang return for senior year after heading to Mexico for a summer getaway of fun and drama.

Airing on Thursday nights, the fourth season of Grown-ish averages a 0.09 rating in the 18-49 demographic and 216,000 viewers. Compared to season three, that’s down by 36% in the demo and down by 35% in viewership in the live+same day ratings (including DVR playback through 3:00 AM). While these numbers don’t include further delayed or streaming viewing, they are a very good indicator of how a show is performing, especially when compared to others on the same channel.

As the final season of “black-ish” comes to a close and the current “grown-ish” class graduates Cal U, the beloved “-ish” universe continues with Emmy®-nominated “grown-ish” picked up for a fifth season. “black-ish” star Marcus Scribner heads over to join his TV sister Yara Shahidi on the Freeform spinoff, reprising his role as Andre Johnson Jr. as he embarks on his own journey to being “grown.”

“grown-ish,” which is currently in its fourth season and airs on Thursdays at 10 p.m. on Freeform and streaming the next day on Hulu, follows Zoey and her classmates on the road to graduation.

The final season of “black-ish” returns with new episodes on Tuesday, March 22, on ABC, and all seasons are available to stream on Hulu.

Scribner is an NAACP Image Award recipient for Outstanding Supporting Actor in a Comedy Series and is represented by CAA, Artists First, imPRint and Del Shaw Moonves. Alexander is represented by WME, Map Point Management and Gang Tyre, and Lilly by UTA, Ben Jacobson at The Framework Collective and attorneys Jeff Frankel and Mike Castrillo at McKuin, Frankel, Whitehead.

Additional casting news to come at a later date.

About Freeform
Freeform’s distinct brand of coming-of-age programming helps to position it as the No. 1 primetime cable network in entertainment among Adults, Women and Men 18-34 in the 2021/2022 TV season to date. Connecting to audiences with its bold original programming and immersive social engagement, Freeform channels the force and momentum of its young adult audience in its quest for progress with authentic, groundbreaking original series such as Emmy®-nominated “grown-ish,” “Good Trouble,” “Motherland: Fort Salem,” “Single Drunk Female” and “Cruel Summer,” which was the No. 1 new cable drama of 2021 among Women 18-34. Last year, Freeform aired four of the Top 15 scripted cable original series among Women 18-34 — more than any other network, with “grown-ish” ranking as cable’s No. 1 live-action comedy series of the year in the demo.

About ABC Signature
One of the Disney Television Studios, ABC Signature is a global leader in the development, production and distribution of entertainment content across broadcast, cable and streaming platforms. The studio produces many of ABC Entertainment’s most significant hits, including “Grey’s Anatomy,” “black-ish,” and “Station 19”; co-productions “The Good Doctor,” “A Million Little Things,” “The Rookie,” and “Home Economics,” and late-night talk show “Jimmy Kimmel Live!” ABC Signature’s returning series include Hulu’s “Dollface,” and co-production “Woke; “grown-ish” for Freeform; “The Wilds” for Amazon and “Godfather of Harlem” for EPIX. For streaming service Disney +, series include “The Mighty Ducks” and “Big Shot.”

What do you think? Do you enjoy the Grown-ish TV series on Freeform? Are you glad that it’s been renewed for a fifth season?