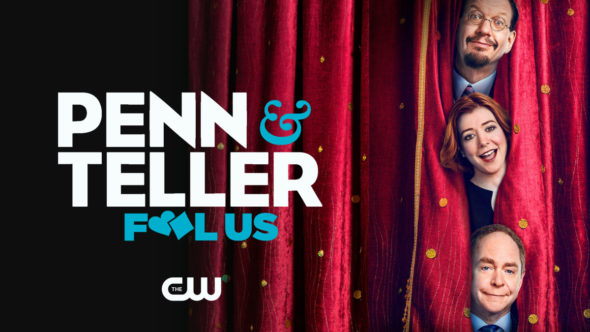 Penn & Teller: Fool Us has become a staple of The CW schedule. Now that the network is scheduling all seven nights each week, the CW programmers will need more series than ever. Is Penn & Teller: Fool Us sure to be renewed for season nine or, could it be cancelled instead? Stay tuned. *Status Update Below.

A magic competition series, the Penn & Teller: Fool Us TV show is hosted by Alyson Hannigan and is judged by comedic illusionists Penn Jillette and Teller. In each episode, aspiring magicians are invited to perform their best trick to try and fool the world-famous team. Anyone who succeeds wins the right to perform with Penn and Teller in their celebrated show at the Rio Hotel & Casino in Las Vegas. The live studio audience and the TV audience watch along with Penn & Teller as they try to figure out the secrets. The master magicians see the trick only once and have to immediately try to figure out how it was done. The live studio audience knows there are no camera tricks, secret edits, or helpful camera cuts — just real magic. Magicians in season eight include Jandro, Piff the Magic Dragon, Helen Coghlan, Paul Gertner, The Shocker, Magic Maxl, Jeki Yoo, Ben Seidman, Amanda Nepo, Shoot Ogawa, Ale Belotto & Guilia, and Mark Clearview.

3/5 update: You can see the latest night’s ratings in context.

What do you think? Do you like the Penn & Teller: Fool Us TV series on The CW? Should it be cancelled or renewed for a ninth season?