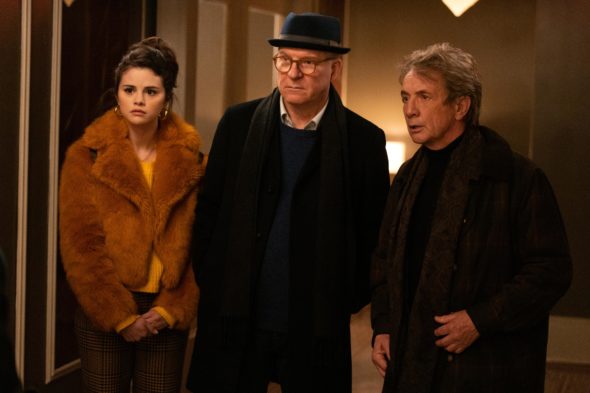 Can this trio really solve this case? Has the Only Murders in the Building TV show been cancelled or renewed for a second season on Hulu? The television vulture is watching all the latest cancellation and renewal news, so this page is the place to track the status of Only Murders in the Building, season two. Bookmark it, or subscribe for the latest updates. Remember, the television vulture is watching your shows. Are you?

Streaming on the Hulu subscription service, the Only Murders in the Building TV show was created by Steve Martin and John Hoffman. It stars Martin, Martin Short, Selena Gomez, Aaron Dominguez, and Amy Ryan. The story follows three strangers who share an obsession with true crime and suddenly find themselves wrapped up in one in the Arconia building in New York City. A former actor, Charles-Haden Savage (Martin) became famous for playing a detective in a police series. Oliver Putnam (Short) is a struggling Broadway director. Mabel Mora (Gomez) is a young mysterious woman who claims that she is renovating an apartment for her aunt. When a grisly death occurs inside their exclusive Upper West Side apartment building, the trio suspects murder and employs their precise knowledge of true crime to investigate the truth.

Unless they decide to publicize viewership, it is difficult to predict whether Hulu will cancel or renew Only Murders in the Building for season two. Since Hulu isn’t ad-supported, it can take a chance on series it believes in, but sooner or later it comes down to production costs, versus viewership numbers. This seems like a close-ended series but I have no doubt that the streamer would like another season if they could get it. I’ll keep my ears open and an eye out for news, and will update this page with breaking developments. Subscribe for free alerts on Only Murders in the Building cancellation or renewal news.

9/15/21 update: Only Murders in the Building has been renewed for a second season.

Only Murders in the Building Cancellation & Renewal Related Links

What do you think? Are you glad that the Only Murders in the Building TV show has been renewed for a second season? How would you feel if Hulu had cancelled this TV series, instead?

And second to comment, apparently! Posted first one before I was done. I have only seen the first 3 episodes and I’m hooked. I love all the actors and the plot has me fascinated. Love murder mysteries!