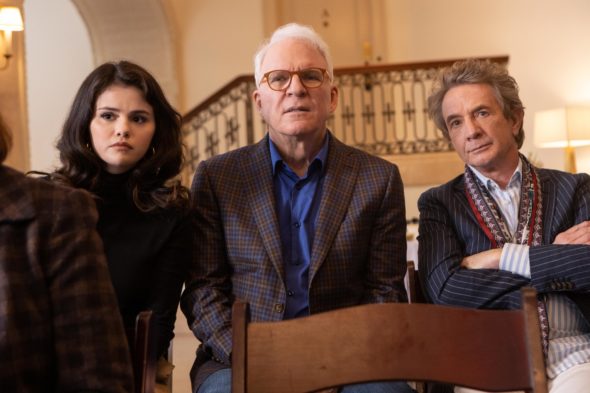 You might want to stay out of the Arconia building. Hulu has renewed Only Murders in the Building for a second season. The streamer has said that the show became the service’s most-watched original series on its launch date and its most-watched Subscription Video on Demand (SVOD) comedy.

A comedic murder-mystery series, the Only Murders in the Building TV show was created by Steve Martin and John Hoffman. It stars Martin, Martin Short, Selena Gomez, Aaron Dominguez, and Amy Ryan. The story follows three strangers who share an obsession with true crime and suddenly find themselves wrapped up in one in the Arconia building in New York City. A former actor, Charles-Haden Savage (Martin) became famous for playing a detective in a police series. Oliver Putnam (Short) is a struggling Broadway director. Mabel Mora (Gomez) is a young mysterious woman who claims that she is renovating an apartment for her aunt. When a grisly death occurs inside Arconia, their exclusive Upper West Side apartment building, the trio suspects murder and employs their precise knowledge of true crime to investigate the truth.

Episodes of the first season are currently being released on Tuesdays and the finale will be available on October 19th. There’s no word yet as to when season two will be filmed or released.

The second season renewal was announced via social media.

Well, looks like we'll be dealing with this trio for another season. I'm sure MOST of you are thrilled! #OnlyMurdersOnHulu pic.twitter.com/NlXhOYvkOB

— Only Murders in the Building (@OnlyMurdersHulu) September 14, 2021

Check out our status sheets to track new TV series pickups, renewals, and cancellations. You can find lists of cancelled shows here.
What do you think? Have you watched the Only Murders in the Building TV series? Are you glad that there will be a second season for this Hulu show?

So happy to hear this news. We love this show. So funny & Selena plays well with the two legends.

Thank you, Hulu. This is an excellent show and well deserving of a renewal.

Love this cast look forward watching on Hulu. Enjoy it and love it.

Love this cast look forward watching on Hulu. Enjoy it and love it