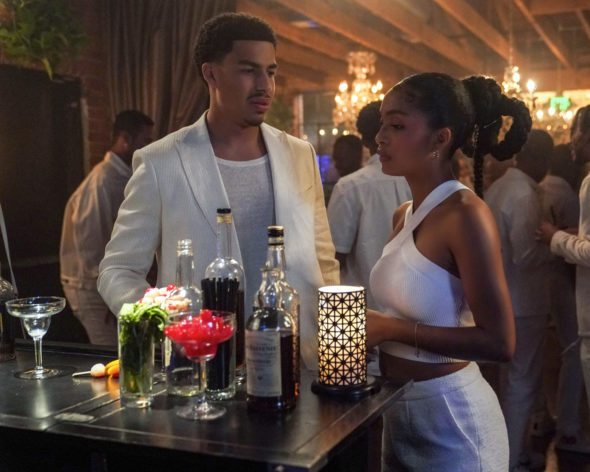 There are some big changes this time around. Has the Grown-ish TV show been cancelled or renewed for a sixth season on Freeform? The television vulture is watching all the latest cancellation and renewal news, so this page is the place to track the status of Grown-ish, season six. Bookmark it, or subscribe for the latest updates. Remember, the television vulture is watching your shows. Are you?

Airing on the Freeform cable channel, the Grown-ish TV show stars Yara Shahidi, Marcus Scribner, Trevor Jackson, Diggy Simmons, and Daniella Perkins. Matthew Sato, Tara Raani, Justine Skye, Amelie Zilber, Ceyair Wright, and Slick Woods recur. A spin-off of ABC’s Black-ish, the show initially follows Dre and Bow Johnsons’ eldest daughter, Zoey (Shahidi), as she goes to college and begins her journey to adulthood. In the fifth season, Zoey and her friends have graduated college. Meanwhile, her brother Andre Johnson Jr., aka Junior (Scribner) has enrolled at Cal U and embarks on his own journey to being “grown”.

The fifth season of Grown-ish averages a 0.06 rating in the 18-49 demographic and 135,000 views. Compared to season four, that’s down by 33% in the demo and down by 34% in viewership in the live+same day ratings (including DVR playback through 3:00 AM). While these numbers don’t include further delayed or streaming viewing, they are a very good indicator of how a show is performing, especially when compared to others on the same channel. Other economic factors can be involved in a show’s fate, but typically the higher-rated series are renewed and the lower-rated ones are cancelled. Find out how Grown-ish stacks up against other Freeform TV shows.

Will Freeform cancel or renew Grown-ish for season six? This comedy’s been one of the channel’s highest-rated shows but it’s been on the air for quite a while now. Cable comedies don’t typically last as long as broadcast ones so it might be time for this series to end. However, with the addition of Scribner and a shift in focus, the producers are shaking things up. If the audience embraces the changes, I think Grown-ish will be renewed. If not, I suspect it will be cancelled. I’ll update this page with breaking developments. Subscribe for free alerts on Grown-ish cancellation or renewal news.

What do you think? Do you hope that the Grown-ish TV show will be renewed for a sixth season? How would you feel if Freeform cancelled this TV series, instead?