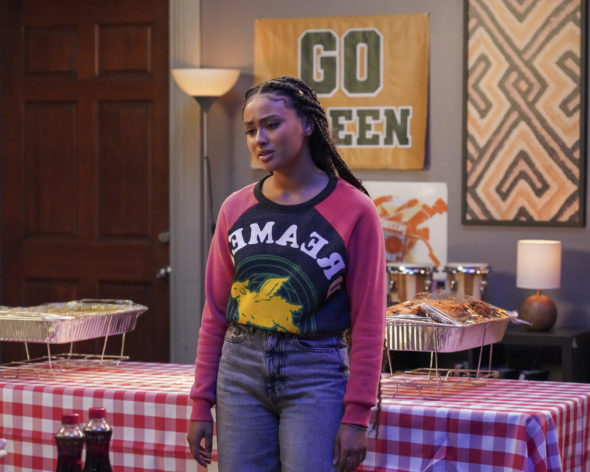 Grown-ish is getting ready for some significant changes. Six new faces have been added to the cast of the Freeform series, and Daniella Perkins (above) has been upped to a series regular. Per Deadline, the new recurring cast members are Matthew Sato, Tara Raani, Justine Skye, Amelie Zilber, Ceyair Wright, and Slick Wood.

The following was revealed about the new additions to the cast:

Raani plays Zaara, a first-generation Muslim-American. She is a sophomore, type A overachiever with a lot of swagger. Zaara is queer and open with her sexuality.

Skye plays Annika, a funny, sharp, and extremely ambitious freshman. She chose Cal U because it was good for her brand.

Zilber plays Lauryn, a freshman who is a little shy and awkward, and sometimes a bit naive, so she overcompensates in an attempt to mask her insecurities. She’s a devout Christian, but very open-minded.

Wright plays Zeke, a contemporary all-American football player who is super confident and comfortable in his own skin, but still extremely endearing.

Sato plays Brandon, a sophomore at Cal U, who is charming as hell, smart, and an overachiever who’s comfortable in any situation. His eyes are set on a political future with the goal of creating change.

Woods plays Slick, a freshman who tells it like it is. Slick Is a style icon with no filter.

The fifth season of Grown-ish debuts on Wednesday, July 20th.

What do you think? Are you excited to see these new additions to the cast of Grown-ish?

Oh my God why she’s outdated and the character is much younger than what she represents. Why the heck is this still on the air.