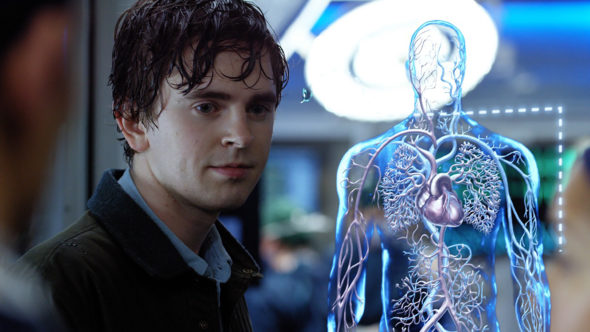 A Wyoming native with autism and savant syndrome, Shaun travels to Silicon Valley for a surgical residency. Upon landing in California, he comes to the rescue of a gravely injured young boy. Thanks to his incredible memory and keen ability to perceive spatial relations, Shaun is able to diagnose him and implement unique life-saving emergency treatment, because he recognizes signs and symptoms — ones which are not clear to a far more experienced doctor on the scene.

Meanwhile, because he is on the Autism Disorder Spectrum, and because he is late for his interview due to the accident, the San José St. Bonaventure Hospital board is eager to reject Shaun’s residency. Only hospital president Dr. Aaron Glassman (Schiff) advocates for him. It is clear that Glassman has a personal investment in this young candidate.

In flashbacks, Aaron meets a then 14-year-old Shaun (Graham Verchere) and his protective younger brother, Steve (Dylan Kingwell), after the boys’ abusive father throws Shaun’s pet bunny across the room, which kills the poor animal. In the wake of the rabbit’s death, the brothers leave home and set up camp in an abandoned school bus. Steve later dies from a freak accident, while he’s trying to help Shaun make friends with some other boys.

In the present day, the board asks Shaun to explain why he wants to be a surgeon. Although he processes events and emotions differently than a neurotypical person might, he still connects with them.

Shaun draws upon the devastation wrought by the loss of both his brother and his pet. He knows both were robbed of full lives and all the opportunities and experiences which should have been theirs. He explains to the board how wants to prevent that from happening to anyone else.

While savant syndrome contributes to Shaun’s unique ability to understand a patient’s condition, his autism can hinder his ability to communicate with others, which concerns the hospital board. Because of Glassman’s passionate advocacy and persistence, as well as his willingness to lay his own professional standing on the line, the board eventually approves Shaun’s candidacy.

When Shaun is finally assigned to a surgical team, the lead surgeon makes no secret of his biases, and tells Shaun he’ll never do more than administer suction in his O.R. Shaun, however, remembers Steve telling him that he can do anything. He hones in on the senior doctor’s arrogance and asks if it helps him as a surgeon, hurts him as a person, and if it is worth it.

Will Shaun be able to learn how to hand the interactive tasks necessary for a successful surgeon? Can he do all the job requires — and well enough to both save lives and overcome the bigotry of others? Stay tuned.

What do you think? Do you like The Good Doctor TV series? Should this TV show be cancelled or renewed for another season on ABC?

Love this show . It’s my favorite show on ABC

Hello the Good Doctor needs to have a 12 season like Dr House because it was an amazing teaching us about addiction and drama. And since I am a mom of an Autistic kid I Love this gave inspired to them thank God my kid is able to learn everything because I know is hard for other mothers like me but gave us hope that our kids can be able to be autosuficient for themselves when we no longer a life

I really look forward to watching this show every week. Please continue this excellent show. Thanks so much!

The show is becoming ridiculous, with the doc’s sex life…There’s no decent storyline anymore..I’m finished with the series..

I love this show and look forward to it every day of the week. This is such a Nice show and I think we need shows like this. Please do Not cancel this interesting, intelligent, relaxing and thoroughly good TV show.

Love the series – keep it going!

I have been waiting ever since the last show for it to start again . My son is atistic. and this my favorite.

my favorite show on TV…rarely watch anything else on TV.