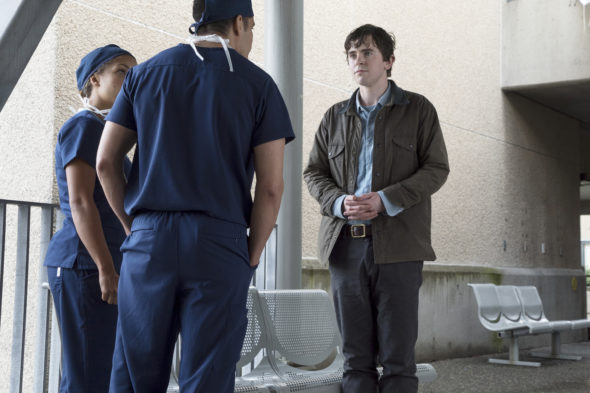 Is there a doctor in the house? Has The Good Doctor TV show been cancelled or renewed for a second season on ABC? The television vulture is watching all the latest cancellation and renewal news, so this page is the place to track the status of The Good Doctor, season two. Bookmark it, or subscribe for the latest updates. Remember, the television vulture is watching your shows. Are you?

The Good Doctor centers on Dr. Shaun Murphy (Highmore), a new surgical resident with autism and savant syndrome. His incredible memory and keen ability to perceive spatial relations inform Shaun’s gifted comprehension of his patients. Meanwhile, his autism can hinder his ability to communicate with others. With only the help of his advocate, Dr. Aaron Glassman (Schiff), Shaun must challenge the skepticism and prejudices of the hospital’s board and medical staff, in order to do his job and save lives.

The first season of The Good Doctor averaged a 1.79 rating in the 18-49 demographic and 9.77 million viewers. Find out how The Good Doctor stacks up against other ABC TV shows.

Will The Good Doctor be cancelled or renewed for season two on ABC? It premiered with very healthy ratings, was picked up for a full season, and a thriving drama is just what the doctor ordered for the Alphabet Network. As long as the ratings don’t drop that much, my gut says it will easily score a renewal. For now, I will keep an eye on the Nielsens and will update this page with breaking developments, as well as any change in this show’s prognosis. Subscribe for free updates on any cancellation and renewal news regarding The Good Doctor.

3/7/18 update: The Good Doctor is renewed for season two on ABC. Details here.


What do you think? Should ABC cancel or renew The Good Doctor TV series for a second season? Write your prescription in the comments, below.

I am no longer going to watch The Good Doctor. I have been a loyal viewer since the beginning and as an Mexican American person, it was so wonderful to finally have a Hispanic person represented in a positive way. Nicholas Gonzalez was the only Hispanic on a show with several White, African American and Asian characters, yet you choose to kill him off.

It is very disappointing to not see many Hispanics on any TV or movie rolls. I am asking all Hispanics to boycott this show.