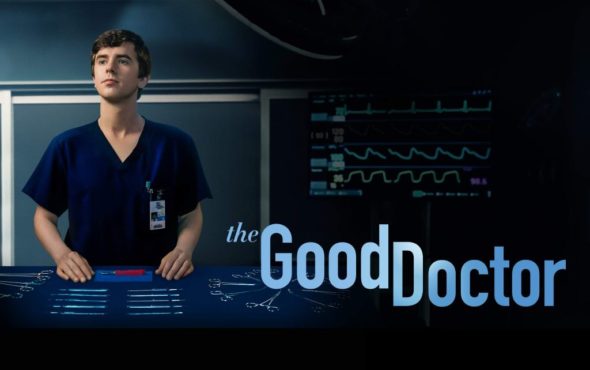 This doctor’s going to continue working nights for a while. ABC has renewed The Good Doctor TV show for a fourth year which will air as part of the 2020-21 broadcast season.

ABC ORDERS SEASON FOUR PICKUP OF ‘THE GOOD DOCTOR,’ THE NO. 1 SERIES ON MONDAY NIGHTS

ABC has renewed the hit drama series “The Good Doctor” for the 2020-2021 season, it was announced today by Karey Burke, president, ABC Entertainment. The series is produced by Sony Pictures Television and ABC Studios. ABC Studios is a part of Disney Television Studios, a collection of studios comprised of 20th Century Fox Television, ABC Studios and Fox 21 Television Studios.

“‘The Good Doctor’ has been a cornerstone on Monday nights and is one of those special heartfelt series that fearlessly tackles inclusivity,” said Burke. “David Shore’s thoughtful storytelling, combined with an incredible cast led by Freddie Highmore’s nuanced performance as Dr. Shaun Murphy, are what have made this series a breakout hit over the past three seasons, and I’m excited to see where they take us next.”

“We are incredibly thankful to ABC for all their continued support and to David Shore for bringing ‘The Good Doctor’ to television at the exact right moment; the show’s complicated, surprising and emotional journey is the perfect prescription for right now,” said Jason Clodfelter, co-president of Sony Pictures Television.

“The Good Doctor” is ABC’s most-watched show this season after 35 days of delayed viewing across all linear and digital platforms, averaging 15.6 million Total Viewers with multiplatform playback. “The Good Doctor” is the season’s No. 1 gainer in TV playback in Total Viewers, soaring by +6.41 million viewers from its Live+Same Day average to its Live+35 Day average. In addition, the ABC drama nearly triples its Live+Same Day Adult 18-49 rating after 35 days of playback, spiking by +175% to stand as the No. 1 broadcast gainer this season. Based on original telecasts, “The Good Doctor” is Monday’s No. 1 series in Total Viewers and ranks among the season’s Top 10 series overall (No. 9).

Dr. Shaun Murphy, a young surgeon with autism and savant syndrome, continues to use his extraordinary medical gifts at St. Bonaventure Hospital’s surgical unit. As his friendships deepen, Shaun continues to tackle the world of dating and romantic relationships, and work harder than he ever has before, navigating his environment to prove to his colleagues that his talents as a surgeon will save lives.

What do you think? Are you a fan of The Good Doctor TV show on ABC? Are you glad that it’s been renewed for a fourth season?

I am not into watching Series TV but this one is definitely a keeper! I always look forward to each and every episode of The Good Doctor. This show brings out all the emotions in me and I love it I really hope it keeps going and the acting has been great!

My husband and I really enjoy this show. I am happy to hear there will be at least another season. (I hope there will.be even more)!!!!!!

SO VERY VERY glad to hear this. I LOVE the show!!!!

really enjoy this movie, so glad it will be on again we need more good movies like this, thank you.

Love this show! So glad The Good Doctor will still be on.

LOVE THE GOOD DOCTOR, CAN’T WAIT TO SEE THE GOOD DOCTOR AGAIN. DON’T LIKE THE OTHERS SHOW’S HIS SHOW IS THE BEST!! ARE YOU SELLING THE VOLUME OF EACH SEASON?? I WOULD LIKE TO BUY THEM !! THANK YOU FOR A GREAT SHOW!! PAULITA ROBLES

I think The Good Doctor is the best show. The actors and storyline are challenging and engaging. The whole cast is superb. I appreciate the relationship of Shaun and his mentor as well as the support he receives from his peers.

I LOVE The Good Doctor and am thrilled it was renewed. And I must compliment the writers for the extraordinary finale episode. It was absolutely the BEST episode ever with several heartwarming stories going on at the same time. Each one was so emotional and truly tugged at my heartstrings. I am not among the show’s young audience but rather a senior.

Our family really enjoys this show and its characters. We are very saddened by Dr. Melendez’s character leaving the show; he was one of our favorites. So happy to hear it has been renewed for season 2020/21 ! Finally something interesting being renewed… instead of just all the so-called “reality TV shows”.