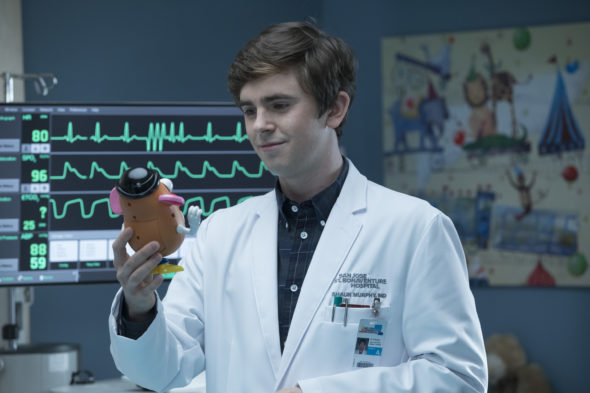 The doctor is “in” for the 2019-20 television season. ABC has announced that their Monday night medical drama, The Good Doctor, has been renewed for a third season.

THE GOOD DOCTOR – SEASON 3
The doctors at San Jose St. Bonaventure Hospital will be back with new episodes of the successful drama, produced by Sony Pictures Television and ABC Studios. The series airs Mondays at 10:00 p.m. ET on The ABC Television Network, streaming and on demand.

The second season of The Good Doctor is averaging a 1.13 rating in the 18-49 demographic and 6.78 million viewers. Compared to season one, that’s down by 37% and 31%, respectively. Both seasons have 18 episodes.

Today, the alphabet network also renewed A Million Little Things for a second season and Shark Tank for season 11. At this point, it looks like all three will see their new seasons launch in Fall 2019.

What do you think? Do you like The Good Doctor TV show on ABC? Will you be watching season three? Were you worried that it might be cancelled?

Yes, I am very happy for the return of the show “The Good Doctor” It’s a fantastic series Keep up the good work

The Good Doctor is my favorite TV show. I’m so glad it has been renewed.

I love The Good Doctor. I am so glad that it is renewed. Dr. Murphy is a phenomenal and complex character. I find it educational and entertaining.

Everyone I talk to loves this show ! It has heart, great performances, and story lines.
The Good Doctor is a winner, and should be renewed

This is the best show ever. Please continue to bring it back and soon!