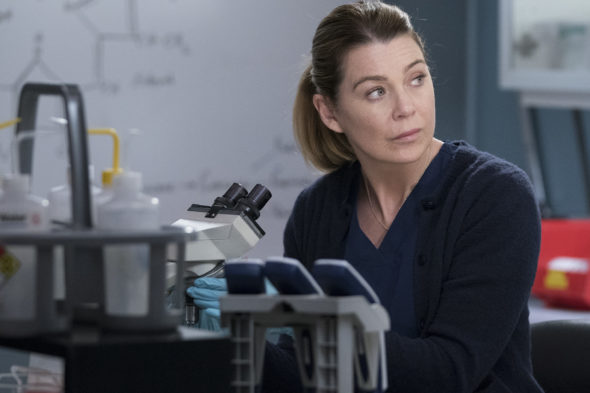 Season 15 of Grey’s Anatomy stars Ellen Pompeo, Justin Chambers, Chandra Wilson, James Pickens Jr., Kevin McKidd, Kim Raver, Jesse Williams, Caterina Scorsone, Camilla Luddington, Kelly McCreary, and Giacomo Gianniotti. Though this series has been on the air for 15 seasons, there is still plenty of personal and professional drama. Meredith Grey (Pompeo) and the other doctors at Seattle’s Grey Sloan Memorial are faced with life-or-death decisions on a daily basis. This team of healthcare professionals share friendship and sometimes, even more. Together they discover that neither medicine nor relationships can be defined in black and white..

The series ranks in first place in the demo when compared to other scripted ABC TV shows of the 2018-19 season. It’s in second place when it comes to viewers, behind The Conners sitcom.

What do you think? Do you still like the Grey’s Anatomy TV show? Will you be watching season 16 of this ABC medical drama? Do you think renewing the show for a 17th season so far in advance was good idea?

The show definitely sagged around Seasons 5 – 12 and I stopped watching GA. However, I picked it up again, and I think Season 15 was THE BEST season of GA in its history. There was more humor and less soap opera, the cast seemed to be the most cohesive cast since the beginning of the show. I love the fact that so many original cast members are still active in the show and the ending begged for another season. Watching the emotional growth in the characters this season was needed and felt very good. Five years ago, I would… Read more »

NEVER stop! After many years, this is still my favorite ‘go to’ show. Always evolving, never stale, and with a heart.

I have been watching ALONG time. I like the show but sometimes I don’t like the writers ways ,so I don’t watch for a few shows, I don’t know if I will watch 17 season , it will depend on the writers .

I am getting very bored with this show. It has become a MAJOR soap opera. I never watched the soaps during the day and now it seems that so many night time shows have evolved into soaps. Not very happy with any of them.

I’M SO HAPPY ABOUT THIS!!