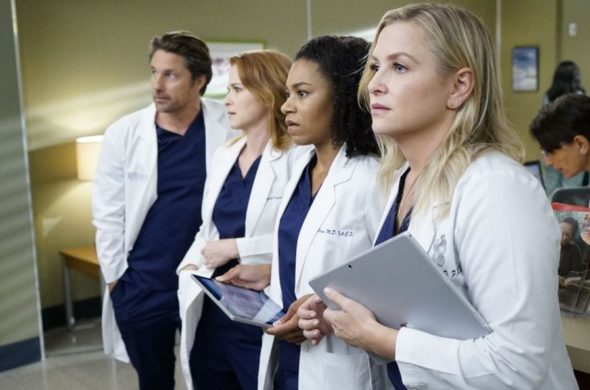 Is Grey’s Anatomy coming to an end? Recently, Shonda Rhimes discussed the future of the hit ABC TV show.

When Entertainment Tonight asked Rhimes how long Grey’s Anatomy will run, she revealed the ABC series will beat ER‘s run of 15 seasons.

Shonda has no ending in mind for #GreysAnatomy.

Q: "ER" has 15 seasons. Do you guys think you're gonna surpass them?
A: Yes. Absolutely. pic.twitter.com/xBXT9QAoGa

What do you think? Do you watch Grey’s Anatomy? How many more seasons do you want?

My guess is that most Grey’s Anatomy fans are not old enough to remember ER. I stopped watching Grey’s Anatomy years ago because it is almost entirely focused upon the sexual habits of the staff. Unfortunately, my spouse continues to watch so I’m subjected to the show anyway. ER had its share of hospital relationships, but Grey’s Anatomy would have no weekly plot line if they removed the snealky closet sex and partner-swapping from the script. In fact, Grey’s Anatomy, Scandal and How To Get Away With Murder ALL follow the same strategy: every time the ratings slip the level… Read more »

Not with this cast in its current incarnation. Time for a couple of folks to move on, and for others to remember that you really can’t go home again.

The ratings this season and last beg to differ.

It is ABC’s cash cow. I know The Good Doctor might be beating it, I haven’t compared the number so I don’t know, but ABC won’t cancel this until it falls below 1.5 in the demo. As far as I know since the last time I checked which was after the season 14 winter break, it has never fallen below a 2. Krista Vernoff is now the show-runner, therefore the great episodes we’ve seen this season are due to her not Shonda, Shonda’s production company produces Grey’s Anatomy for ABC, but she is not involved in any creative decisions anymore,… Read more »