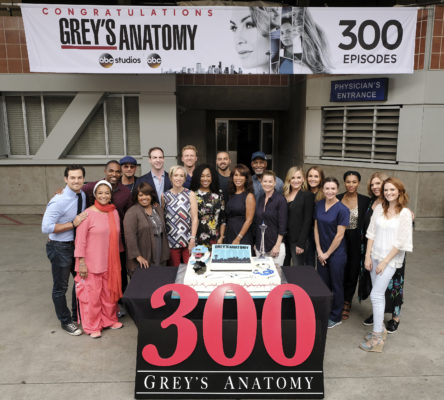 Grey’s Anatomy is about to hit a major milestone. Today, ABC announced the long-running TV show will celebrate its 300th episode next month.

The 300th episode of Grey’s Anatomy debuts on November 9th at 8 p.m. ET/PT. To celebrate, ABC will hold a “Day of Grey’s” and several of the show’s cast members will be featured on Live with Kelly and Ryan, Jimmy Kimmel Live, The View, The Chew, and Nightline.

ABC celebrates 300 episodes of the long-running hit drama series “Grey’s Anatomy” with a special “Day of Grey’s” on Thursday, November 9.

The celebration begins the evening prior on Wednesday, November 8, when “Jimmy Kimmel Live” hosts Jesse Williams (Dr. Jackson Avery) as a guest in studio.

On November 9, Ellen Pompeo begins the day live in studio in New York at “Good Morning America” and then segues over to “Live with Kelly and Ryan” where she’ll talk about playing the iconic Dr. Meredith Grey for 14 seasons. From there, Ellen will drop by both “The View” and “The Chew.”

The 300th episode airs at 8:00 p.m. EST that evening. In this special episode, entitled “Who Lives, Who Dies, Who Tells Your Story,” a rollercoaster car falls off the track at the county fair and the doctors at Grey Sloan tend to patients who spark memories about ghosts from their past.

Closing out the celebration, “Nightline” airs an exclusive behind-the-scenes piece on the show with Michael Strahan.

What do you think? Do you watch Grey’s Anatomy? Are you excited for the 300th episode?

I would like to extend my sincerest Congratulations to each & every member of the “Grey’s Anatomy” Family! I too, have been a faithful viewer since Season One, Episode One, (“Hard Day’s Night”). The mega-talented actors, combined with superb writers, and Ms. Rhimes at the helm, has made one of television’s great ensemble shows. Grey’s, you are on a small, very remarkable list of shows that will be in viewer’s hearts forever!
Thank you, all, for such a remarkable accomplishment. BTW, “George, Izzy, Derek, Mark, Cristina, & Callie”… You are all missed!
Another decade or two? One can only hope!

Love this show. Have been a faithful watcher since day 1! Still miss McDreamy though.