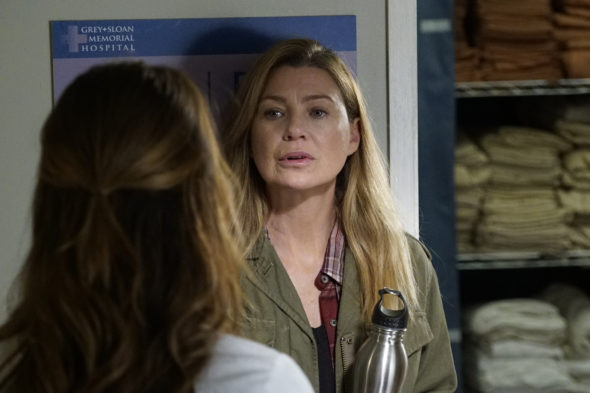 Grey’s Anatomy is back. Season 16 of the ABC drama premiered last week, and Meredith Grey is dealing with the aftermath of her breaking the law last season. Her friends are also dealing with their own decisions to stand by her.

Grey’s Anatomy was renewed for two seasons in May, so fans have no reason to worry about the series ending yet. But, it will end eventually. It has been made clear in recent years that Grey’s Anatomy will end when Ellen Pompeo and Shonda Rhimes are ready to end it. Karey Burke, the woman in charge of ABC’s entertainment division said she wouldn’t mind watching the series with her grandchildren, per a Deadline report.

Ellen Pompeo is not ready for the ABC series to end yet, but that time will come eventually. The actress sat down with James Corden last week, and she revealed how she would like to see the series end at some point. Per Us Weekly, she said:

“I mean, I’d love to have some of the old cast come back. That probably won’t happen, but that would be the most amazing way to [end it].”

She knows that would be a challenge. Several main characters departed the series by dying. This includes Derek, played by Patrick Dempsey, and Mark Sloan, played by Eric Dane. However, fans could always see Sandra Oh return for the finale. Cristina Yang has been mentioned several times on the series since Oh departed at the end of season 10.

Rhimes has tried to bring back at least one more character to the series. Kim Raver, returned as a series regular, last season. However, TV Line reported last week that the plans to bring another character back fell through.

What do you think? Are you a fan of this ABC series? How many seasons of Grey’s Anatomy would you want to see?

Please renew the show. I love this show and I have been watching for many years

i hope they never end the show however i know that is not possible so i want it to go on and bring back some of the original people.

If I read another article about the end of the show, I’ll ……..

When it’s ready to come to and end then talk to us about it.

In the man time just gives us more of the excellent episodes.

This year, I’d like to see Meredith and Andrew get married and eventually start a family. I think a great ending would be one where Zola turns out to be a doctor and Meredith then retires with Andrew.

I have watched this show for MANY. Years . I like it but sometimes the story line goes in a direction I don’t get !!!

Another 25-30 years would take me to dementia so that is how long I will be watching. Meredith should be ready to retire by then. I wish they hadn’t had George die so he could return. And of course a Christina revisit would be wonderful. Would also like to see Callie, April & Arizona. Keep evolving.

I love Grey’s Anatomy. I will watch for as long as they stay on the air. I don’t want it to end.

Enjoy it. Hope it continues

Love this show..it could go on forever, and it would be fine with me..