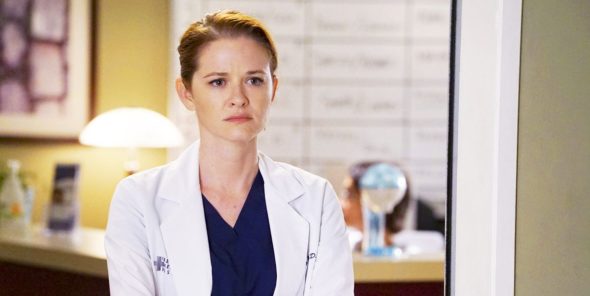 Grey’s Anatomy fans have seen a lot of returning faces this season. Patrick Dempsey and T.R. Knight have both returned for appearances. Their characters have visited Meredith (Ellen Pompeo) on a beach in her mind while she is in a coma due to having COVID-19.

Now, one of the medical drama’s living former characters is returning. Sarah Drew will appear on an episode later this season as Dr. April Kepner. Drew departed the ABC series after nine seasons at the end of season 14. The actress left Grey’s Anatomy when her character decided to focus on married life with her husband.

It was not revealed when she would appear, but others may return as well. Per Deadline, showrunner Krista Vernoff teased recently that “chances are good you’ll see other people on the beach.”

It is not clear if the series will return for an 18th season next fall. ABC is in contract talks with the cast and crew at this time.

What do you think? Are you excited to see Drew back on Grey’s Anatomy on ABC?

My husband is addicted to this show. I don’t watch it anymore but he’s on Netflix watching all the old shows over again. I watched the first 6 years of it, but I was a fan of Katherine Heigl and Sandra Oh.

Yes, bring her back. She’s such a great actress.

I couldn’t care less about Sarah Drew. I have not missed her but I will miss Giacomo Gianiotti.

I can not wait to see Sarah Drew. I wish it was longer than one episode.

Yes! I want to see Grey’s Anatomy return next season!!

My husband and I always like Grey’s because it was a bit edgy and had some unexpected twists and humor. But, gotta say, this fascination with talking to the dead is getting old. Izzie talked to dead Denny, now Meredith – and like that beach it seems to be going on forever.

Please renew this show for next season! It’s a great show. I look forward to it every year.