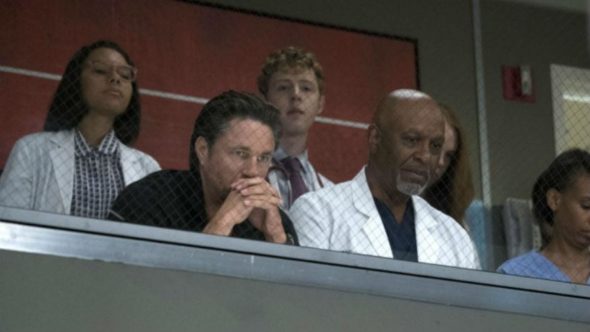 How long will the Grey-Sloan Memorial Hospital remain open? Is the Grey’s Anatomy TV show cancelled or renewed for a 15th season on ABC? The television vulture is watching all the latest cancellation and renewal news, so this page is the place to track the status of Grey’s Anatomy, season 15. Bookmark it, or subscribe for the latest updates. Remember, the television vulture is watching your shows. Are you?

The 14th season of Grey’s Anatomy averaged a 1.93 rating in the 18-49 demographic and 7.56 million viewers. Compared to season 13, that’s down by 7% in the demo and down by 4% in viewers. Find out how Grey’s Anatomy stacks up against other ABC TV shows.

While the Grey’s Anatomy TV show has remained a top-rated drama for ABC, nothing can last forever. One also has to wonder how long the show will continue now that creator Shonda Rhimes has left ABC Studios for Netflix. While it seems unthinkable that Grey’s Anatomy will be cancelled this year, this could be the beginning of the end. I’ll keep an eye on the Nielsens and update this page with breaking developments. Subscribe for free updates on any cancellation or renewal news about Grey’s Anatomy.


What do you think? Do you still like the Grey’s Anatomy TV show? Did you think it should be renewed for season 15 on ABC? How would you feel if ABC had cancelled this TV series, instead?

I would absolutely be heart broken if the show gets cancelled. I will never get tired of watching. I’m so sad when the season ends each year. So excited to hear we are on for another year. Yeah!!!!!!!!!!

They can’t leave at the end of Series 14 we have no closure !

You can not cancel Greys I will die and many other people as well!! Please renew we need more!!!

hello my sweet friends the season 14th of greys anatomy is so passionate magnificent , i pray so strong each day for season 15th renewed good luck for all my great friends of SEATTLE best regards