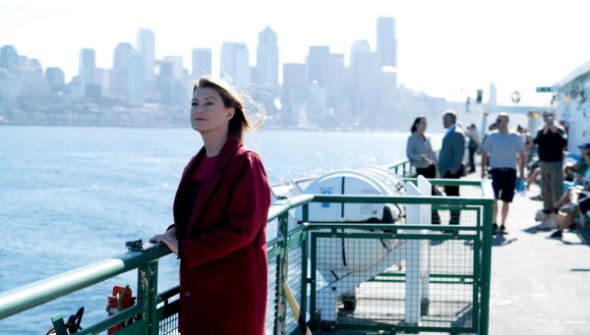 Grey’s Anatomy: A Look at the Ratings

Grey’s Anatomy has been one of ABC’s top-rated TV series since it premiered in 2005, so it’s no surprise the show has been renewed. So far, season 14 is averaging a 1.97 rating in the 18-49 demo and 7.669 million viewers. In the demo, Grey’s is ABC‘s second highest-rated program for the 2017-2018 season, falling just after the Roseanne revival. In terms of average total audience, it currently ranks third, behind Roseanne and The Good Doctor.

UPDATE: ABC has issues a press release on the season 15 pickup. Check it out.

ABC’s hit medical drama series “Grey’s Anatomy” has been picked up for another season, it was announced today by Channing Dungey, president, ABC Entertainment.

“‘Grey’s Anatomy’ has a special place in my heart and millions of viewers feel the same way,” said Dungey. “Thanks to fiercely loyal fans who have been on this journey since the beginning, and new generations of viewers who continue to discover the joy and drama of Grey Sloan Memorial, the show is as strong as ever.”

Next season will be the 15th season of “Grey’s Anatomy,” which is ABC’s longest-running primetime drama series. Only seven dramas in the history of television have had more seasons.

In its 14th season, “Grey’s Anatomy” is ABC’s No. 1 drama among Adults 18-49, ranking among the Top 5 broadcast series on TV, and is tied with ABC’s “The Good Doctor” as the No. 2 broadcast drama. “Grey’s Anatomy” is improving over this point last season by 3% in total viewers to deliver its most watched season in four years – since the 2013-14 season.

Recipient of the 2007 Golden Globe Award for Best Drama Television Series and nominated for multiple Emmys(R), including Outstanding Drama Series, “Grey’s Anatomy” is considered one of the great television shows of our time. The high-intensity medical drama follows Meredith Grey and the team of doctors at Grey Sloan Memorial, who are faced with life-or-death decisions on a daily basis. They seek comfort from one another, and, at times, more than just friendship. Together they discover that neither medicine nor relationships can be defined in black and white.

What do you think? Are you a fan of the Grey’s Anatomy TV series? Do you think season 15 should be the series’ last?

Grey’s Anatomy is a favorite…..watch weekly and also watch reruns on LIFETIME …and Netflix. Love the show and characters and truly miss characters who have left…..please give a date for Season 15 to begin

I would hate to see them end the show I think they should keep it on.

Every episodes in Grey’s Anatomy is intriguing, especially episodes in season 13 & 14..I will like to see season 15, if they bring it on.

Grey’s Anatomy is the highlight of my week. I’m not much of a tv person, period.
Until Greys Anatomy. Let it continue forever. Come on Season 15!!!!

Please let it continue. It is the greatest television show in the history and making of tv!! I’m absolutely in love and would love to have a new episode every day! Or five! Hahaha. Need an air date for s15!!

I love Grey’s! I want it to continue forever!

I am not sure why I still watch this show; really it has outrun its usefulness. If it were to end with season 15, I would not miss it.

Well stop watching it it is as simple as that

I have been watching Grays for a very long time. I get sick of it and stop watching for a while but….always go back , sooner or later !

I love this show! Grey’s Anatomy should definitely continue.

what does this mean for htgawm