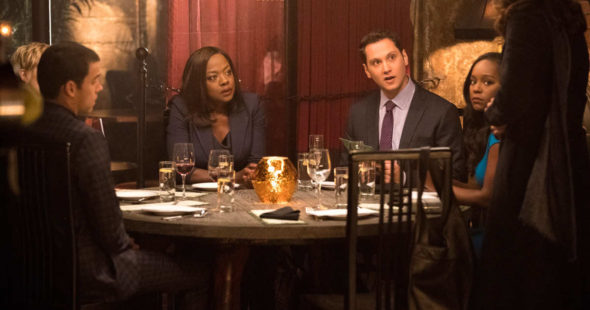 How long can Professor Keating get away with it? Has the How to Get Away with Murder TV show been cancelled or renewed for a fifth season on ABC? The television vulture is watching for the latest cancellation and renewal news, so this page has is the place to track the status of How to Get Away with Murder, season five. Bookmark it, or subscribe for the latest updates. Remember, the television vulture is watching your shows. Are you?

The ratings for this Thursday night series haven’t been very good in quite awhile. It could easily be cancelled but the alphabet network seems to consider it a bit of a prestige project. With only 15 episodes per season, the show still has a way to go before it will have a good-sized syndication package. The network could easily cancel How to Get Away with Murder but, for now, I think it will squeek by and land a fifth season renewal (providing that Davis wants to continue). Subscribe for free updates on any How to Get Away with Murder news.


What do you think? Are you glad that the How to Get Away with Murder TV show has been renewed for a fifth season? How would you feel if ABC had cancelled this TV show, instead?

This is a wonderful program, the people, the story line and especially Viola Davis! Please do not cancel!!! BTW I thought bringing Olivia Pope on was a brilliant move! I wish this show to go on and on and on!

Please please do NOT cancel! We need closure! I have watched since day one.

Keep it!!! Finish the story. It’s a real piste off when you guys cancel something right into a story and than you have no idea what happens. If the viewers are going down do one more season and close the show down. It would be devasted if you guys took it off air.