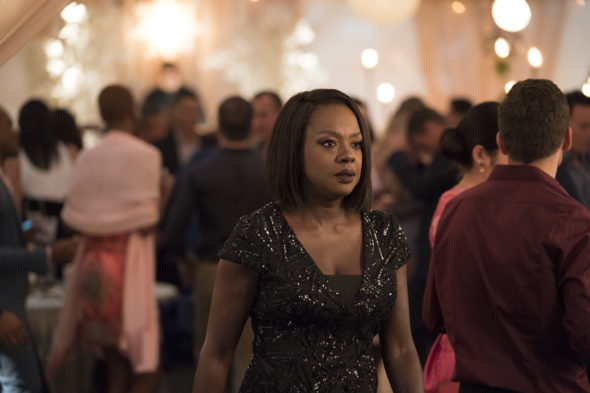 What’s in store for Professor Keating? Is the How to Get Away with Murder TV show cancelled or renewed for a sixth season on ABC? The television vulture is watching for the latest cancellation and renewal news, so this page has is the place to track the status of How to Get Away with Murder, season six. Bookmark it, or subscribe for the latest updates. Remember, the television vulture is watching your shows. Are you?

An ABC legal-thriller, How to Get Away with Murder stars Viola Davis, Billy Brown, Jack Falahee, Aja Naomi King, Matt McGorry, Karla Souza, Charlie Weber, Liza Weil, and Conrad Ricamora. Amirah Vann, Rome Flynn, and Timothy Hutton have joined as series regulars in season five. The story centers on the world of Middleton University Professor Annalise Keating (Davis). Murder, deception, fear and guilt bind her to her long-time associates and students. This season, a new mystery involving one of their own will unfold, as relationships are fractured, and new secrets are exposed.

Will ABC cancel or renew How to Get Away with Murder for season six? The show has really dropped off over the years and Shonda is now in a new deal at Netflix, so do not be surprised if the end is sooner, rather than later. Since that’s just speculation, I’ll keep a hungry eye out and will update this page as things change. Subscribe for free updates on any How to Get Away with Murder cancellation or renewal news.

5/10/19 update: ABC has renewed How to Get Away with Murder for a sixth season.

What do you think? Are you glad that the How to Get Away with Murder TV series has been renewed for a sixth season? Do you think it should be the ABC TV show’s last?

Its amazing series I watch ever ,I am waiting the end episode date???

I vote YES – CONTINUE it. I love the twists and turns and all the characters.

I hope it continues. It’s one of the best shows I watch on Netflix.

Absolutely not awesome show loved it can’t wait for the 6th season please bring the six season back. I can’t end it like that that would just be cruel