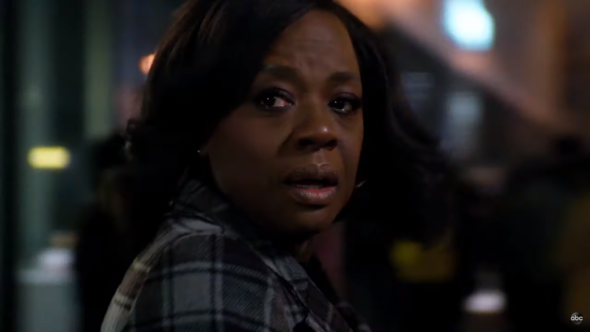 It’s going to be “case closed” on ABC’s How to Get Away with Murder. The Thursday night drama series will be ending with its upcoming sixth season, which will debut on September 26, 2019. The network hasn’t announced an episode count but the past seasons have all had 15 installments each.

A legal-thriller, How to Get Away with Murder stars Viola Davis, Billy Brown, Jack Falahee, Aja Naomi King, Matt McGorry, Karla Souza, Charlie Weber, Liza Weil, and Conrad Ricamora. Amirah Vann, Rome Flynn, and Timothy Hutton joined as series regulars in season five. The story centers on the world of Middleton University Professor Annalise Keating (Davis). Murder, deception, fear and guilt bind her to her long-time associates and students. This season, a new mystery involving one of their own will unfold, as relationships are fractured, and new secrets are exposed.

Here’s the ABC press release and teaser about the final season:

ABC’s ‘HOW TO GET AWAY WITH MURDER’ CONCLUDES WITH A KILLER SIXTH SEASON
The Show That Cemented Viola Davis’ Historic Emmy® Win Returns Thursday, Sept. 26, on ABC

ABC announced today that the upcoming sixth season of “How to Get Away with Murder” will be its last. The series, which has been a constant in ABC’s TGIT programming block since its debut on Sept. 25, 2014, will return THURSDAY, SEPT. 26 (10:00-11:00 p.m. EDT). This season follows Professor Annalise Keating’s (Viola Davis) class through their final semester in law school – while the deception, fear and guilt binding Professor Keating to her students prove deadlier than ever.

During the series run, Viola Davis earned the 2015 Primetime Emmy® for Outstanding Lead Actress in a Drama Series which cemented her name in history as the first woman of color to win an Emmy Award in the category. In addition to the Emmy, Davis has been honored with two SAG Awards, a People’s Choice Award and an NAACP Image Award for her portrayal of Annalise Keating.

“Viola Davis made television history with her unforgettable portrayal of iconic female antihero Annalise Keating,” said Karey Burke, president, ABC Entertainment. “I am eternally grateful to her, Pete Nowalk and Shondaland for creating and bringing to life such a smart, sophisticated and groundbreaking series that has long been an integral part of Thursday nights on ABC.”

Series creator Pete Nowalk says, “Deciding to end this series was a brutal decision, but ultimately the story tells you what to do – as it did here. For me, Annalise Keating’s journey has always had a clear ending. Knowing I have 15 episodes left to finish her story, and the chance to give all the characters their own killer endings, is a gift rarely given to a series creator and I’m grateful to ABC and ABC Studios for the opportunity and creative freedom. I am so thankful to the brilliant cast, writers and crew for dedicating themselves to the most rewarding experience of my career over the last six years. I also want to thank our fans. The only reason this show exists is because of your loyalty and enthusiasm. I can’t wait for you all to see how it ends, with twists and turns and all the craziness we love to create every Thursday night. Buckle up.”

“How to Get Away with Murder” has been praised for its on-screen inclusivity, with storylines exploring racial dynamics, LGBTQ representation, gender inequality and sex positivity. Over the course of the last five seasons, the series has been awarded numerous accolades including an American Film Institute Award for Television Program of the Year, a GLAAD Media Award for Outstanding Drama Series and an NAACP Image Award for Outstanding Drama Series.

Since its debut, “How to Get Away with Murder” has resonated with audiences across the country and in 257 territories. Last season, the series ranked as the No. 1 program in Thursday’s 10 o’clock hour among Adults 18-34 and Women 18-34 and more than doubled its Live + Same Day Adult 18-49 rating, jumping by +114% in Live + 7 Day playback.

Shondaland’s “How to Get Away with Murder” is created and executive produced by Peter Nowalk (“Scandal,” “Grey’s Anatomy”). Shonda Rhimes, Betsy Beers and Stephen Cragg also serve as executive producers. The show is produced by ABC Studios, a division of Disney Television Studios.

About ABC Entertainment
ABC Entertainment airs compelling programming across all day parts, including freshman series “A Million Little Things,” “Bless This Mess,” “The Conners,” “The Rookie,” “Schooled,” “Single Parents,” “Grand Hotel” and “Reef Break.” ABC is also home to “Grey’s Anatomy,” the longest-running medical drama in prime-time television; riveting dramas “The Good Doctor,” “How to Get Away with Murder,” “Marvel’s Agents of S.H.I.E.L.D.” and “Station 19”; the Emmy® Award-winning “Modern Family” and trailblazing comedy favorites “American Housewife,” “black-ish,” “Fresh Off the Boat,” “The Goldbergs,” and “Schooled”; the popular ‘Summer Fun & Games’ programming block including “The $100,000 Pyramid,” “Celebrity Family Feud,” “Match Game,” “To Tell the Truth,” “Card Sharks,” “Press Your Luck,” “Holey Moley” and “Family Food Fight”; star-making sensation “American Idol”; reality phenomenon “Shark Tank”; “The Bachelor” franchise; long-running hits “Dancing with the Stars” and “America’s Funniest Home Videos”; “General Hospital,” which has aired for more than 55 years on the network; and late-night talk show “Jimmy Kimmel Live!”; as well as the critically acclaimed hit special ”Live in Front of a Studio Audience: Norman Lear’s ‘All in the Family’ and ‘The Jeffersons.’” The network also boasts some of television’s most prestigious awards shows, including “The Oscars®,” “The CMA Awards” and the “American Music Awards.”
ABC programming can also be viewed on ABC.com, the ABC app and Hulu.

What do you think? Do you like the How to Get Away with Murder TV show? Do you think it’s ending at the right time or, would you have watched a seventh season?

I absolutely LOVE HTGAWM!! I am heartbroken to see it end & pray that ABC will give us another chance to see what happens to Anneliese & her students!!

I can’t believe that you are ending this show, leaving us handing. This show is amazing.

Very happy to hear that how to get away w murder will return !
Enjoy the show