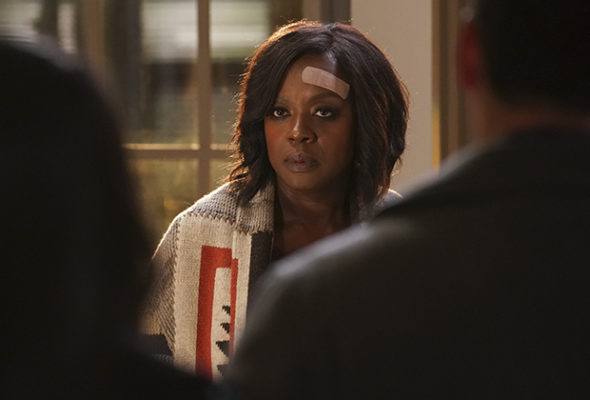 How to Get Away with Murder aired its series finale last night, but is that it for the TV show? Recently, creator Peter Nowalk spoke with Deadline about a possible spin-off for the ABC drama.

In the interview, Nowalk revealed the ending of How to Get Away with Murder was not planned from the beginning:

It was not the ending I always envisioned because I never envisioned one. I only go from season to season. But, last hiatus after season five, I did have this idea that we could play with who killed Annalise but really the answer is no one killed Annalise. The way we could do that is to use [Alfred Enoch] for people to think he was Wes but he’s actually Christopher. The magic of he’s the right age for that to be true and he was available and generous enough to come back and shoot all of this with us. Laurel and Wes had a baby boy, all of that was really random but it just led perfectly to the final twist and really the final scene of the series which felt very satisfying and intriguing and mysterious, but also definitive to me.”

And what about a spin-off? Nowalk says he doesn’t have any plans to continue the ABC TV show, but “never say never”:

That was never the intention when we wrote it. Again, I’m never going to say never. Right now I would love to write about something different. I have a lot of other interests and I think I want to escape the murder role, but never say never. But that was never the intention, it was more really just this idea that Annalise at her core was a teacher and that her legacy lives on.

I’ll never say never. Look, if for some reason people wanted it, I would be so excited that it lasted that long, affected people that long, that’s the biggest like compliment a writer could get so I’ll never say never. I love these characters. I’m still thinking about them. I love these actors so much. Right now all we’re thinking about is saying goodbye to them and then also us all wanting to challenge ourselves with new opportunities and maybe in a world that’s not so bleak for a few minutes.”

What do you think? Are you a fan of How to Get Away with Murder? Do you want a spin-off series?

The show was the best!! The writing was brilliant with so many twists that you never expected. The finale was perfect!

Love the drama and the excitement of this show. Every episode is exciting and Viola Davis is the best actress ever. The entire cast is awesome. A spinoff would be so great!!

I support a reboot. Best shoe ever with worst ending. Once the writers started letting the viewers hear Anneliese’s thoughts… it seemed a bad rush to just finish. Reboot/relaunch please

This is the ONLY show I look forward to seeing every week. All of us at NC Wildlife Rehab LOVE How to get Away with Murder and always talk about it after each show. It makes us happy even on sad days. I can’t beg you enough to please make season 7- really FAST! You can’t just leave us hanging….

Fantastic characters, fantastic actresses and actors and powerful imaginations for the script with crazy ass twists and turns! It’s the BEST SHOW EVER!

Love, love love the show..please do a spin-off

Man they did get away with murder- a whole bunch of them! Loved the Eve, Tegan & mama Cicely end stories. The students we didn’t get much real fill in on their careers, other than an implication life must have been hard due to some really awful Halloween costume level aging makeup. So none of them became an Annalise, & that was left to Christopher to continue on. Please spare us any spin offs. These weren’t characters I liked well enough to care about any further.

Would love a spin off . With Christopher picking up where Annilese left off the door is certainly open .

I have watched How to Get Away With Murder from the very beginning and I LOVE this show!!!!!! I would love to see a spin off or something!!!!! PLEASE!!!! It would be so great to see how the remaining characters got on with their lives after Annalise.

Give us a break ABC…. don’t you have enough people in your group to do a totally new show instead of yet another idiotic spinoff from 2 shows that were pretty awful to begin with? How about running some of your old Disney shows or movies? Something for the whole family this time that we don’t have to pay a king’s ransom to see!

There are plenty of opportunities to put together a quality spinoff series. There are enough cast members remaining to keep the audience intact.

Love How To Get Away With Murder. Have watched it from the beginning. But was very confused when watching the finale. Would live to see a spinoff.

Confused is a nice word, I told my friend and big HTGAWM fan, the last episode made sure you no longer cared about the characters and had no feelings of engagement as in the last six seasons.

I must agree with April Jones that both Scandal and How To Get Away with Murder need a spin-off series. They were both classic series.

I love How to Get Away with Murder! Loved the beginning story, the plot, the characters and the actors/actresses! I would love to see a “life after Annaliese” continuing with same actors/actresses to see the effect she had on her students and their future. If not a continuation, then yes a spinoff or a reboot!