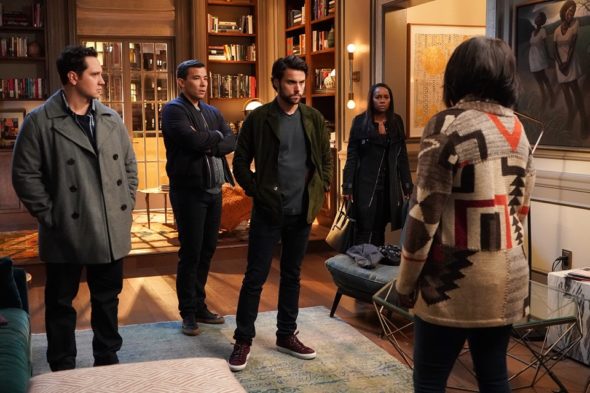 An ABC mystery thriller series, How to Get Away with Murder stars Viola Davis, Billy Brown, Jack Falahee, Aja Naomi King, Matt McGorry, Karla Souza, Charlie Weber, Liza Weil, Conrad Ricamora, Rome Flynn, and Amirah Vann. The story centers on the world of Middleton University Professor Annalise Keating (Davis). Murder, deception, fear, and guilt bind her to her long-time associates Frank Delfino (Weber), Bonnie Winterbottom (Weil), and her students. As the group struggles to move on with their lives and focus on their clients, their past continues to haunt them. Annalise and her inner circle struggle to keep their secrets from getting exposed. Relationships are fractured, lies spin out of control, and shocking, new mysteries upend their entire lives.

PLEASE dont cancel this great show. I LOVE it. And the cast is sooo good.
Don’t end it now.

i just watched the final episode and then found out it is the FINAL ONE and i am in shock. It is a disgrace to leave it that way. Sorry spoilers, but come on wes is back and now you cancel it?? don’t do it.

I love How to…it is so clever and intriguing. Please keep it on the air

OH no you didn’t!! Come on… It’s a great series! Why mess with good shows? Foolish Nielsen decision, or is it, foolish station choice?

They dislike female actors as strong leaders!! Just as the individuals get meat on their part’s, it gets canceled! Love this show and all the actors!