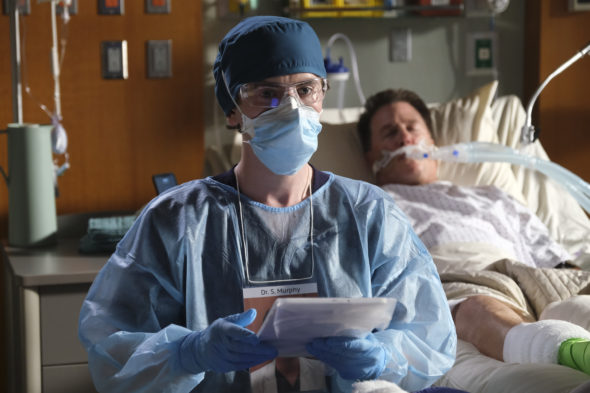 How will Shaun handle the additional pressures of COVID-19 in the fourth season of The Good Doctor TV show on ABC? As we all know, the Nielsen ratings typically play a big role in determining whether a TV show like The Good Doctor is cancelled or renewed for season five. Unfortunately, most of us do not live in Nielsen households. Because many viewers feel frustration when their viewing habits and opinions aren’t considered, we invite you to rate all of the fourth season episodes of The Good Doctor here.  *Status Update Below.

What do you think? Which season four episodes of The Good Doctor TV series do you rate as wonderful, terrible, or somewhere between? Do you think that The Good Doctor should be cancelled or renewed for a fifth season on ABC? Don’t forget to vote, and share your thoughts, below.

*5/4/21 update: The Good Doctor has been renewed for a fifth season on ABC.

Still watching but if they do another preachy episode, it will be deleted from our queue. I don’t need to be propagandized.

Announcement got renewed for 5th season so happy continue. Love it and enjoy it never missed any episodes so good medical drama.

I look forward to this show every week. I hope they renew it again!

We used to like this show, but this year it got political and now it sucks.

The medical scenes were very good as usual and Freddy is a good actor; they all are except you know who.

I fast forwarded most of the show. Losing interest .

Wait until Shaun finds out he’s not the father.
Glassman is.

The Good Dr hasn’t been on and no explanation why. I as a faithful patron am furious. I look forward to this show every Monday and without explanation it’s been off. People are furious. No wonder your numbers are down!

CANCEL THIS SHOW! Was good the first 2 seasons, but has gone down hill ever since!

I love this show: great humor, new and interesting cases, and the most diverse and TALENTED cast! Everyone is great. If you’re still crying about Melendez, you have a sad crush on a TV star. He was great too, and I wish he hadn’t left, but I would say the same thing about anyone on this show. Love it, and never miss it. I have an adult child with ASD. I can only dream they function in a job someday. So inspirational!