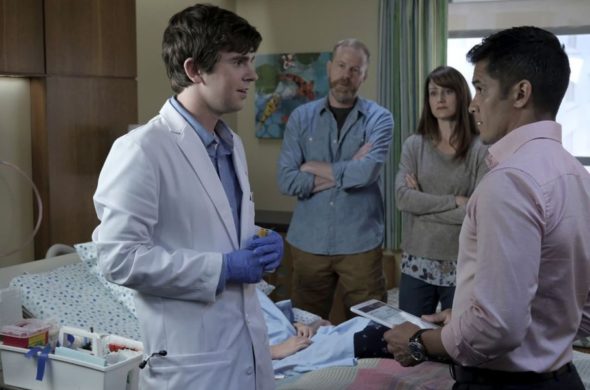 Who’s leaving The Good Doctor? Entertainment Weekly reports there will be casting changes for season two of the ABC TV show.

According to EW, series regular Chuku Modu will not return for season two of The Good Doctor. In his stead, recurring stars Will Yun Lee, Fiona Gubelmann, Christina Chang, and Paige Spara have been upped to series regulars for the upcoming season of the ABC series.

What do you think? Are you a fan of The Good Doctor? Will you watch season two?

Omg,I Can’t Believe I Am Terminally Ill And Season #2 Is Not Till April 2018. I Am So ,So Disappointed! All The Stupid Crappy Sitcoms Get A Least 4-5 Seasons No Problem,And Wonderful,Wonderful Shows Like This Have To Go Thru A Cluster “F” To Get Renewed And Aired.This Is So, So Wrong..Totally Fed Up Fan.

I love this show. Me and my friend Laurie watch it together every week. Can’t wait until the new season starts. When is that?

I will watch season 2

Love this show, we watch it every week.

I have the show on record, so I will not miss an episode. Absolutely love the show.