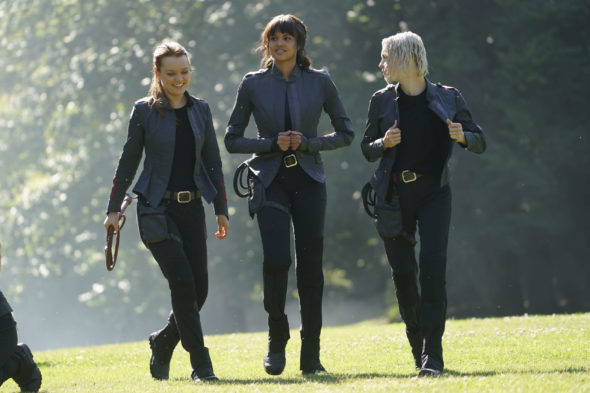 Motherland: Fort Salem will return for its second season next month, and viewers will see five fresh faces on the Freeform drama series. Victor Webster, Mellany Barros, Praneet Akilla, Ess Hödlmoser, and Arlen Aguayo have all been added to the cast of the series which depicts an alternate history following the Salem Witch trials. Taylor Hickson, Jessica Sutton, Ashley Nicole Williams, Amalia Holm, Demetria McKinney, and Lyne Renée star in the series.

Deadline revealed the following about the roles the additions will play on the Freeform series:

“Webster plays Blanton Silver, vice president of the United States. When his daughter is discovered to be a witch, Silver tries to adjust to her newfound identity.

Barros portrays Penelope Silver, the only child of the vice president who accidentally discovers she is a witch. She is enthusiastic, passionate, yet overwhelmed while she navigates this shift from civilian to military life.

Akilla is Gregorio, a male witch from the upper echelons of military witch society (like Abigail). He has huge opinions about how male witches are treated in a female dominant witch army, and makes them known.

Hödlmoser plays M, a non-binary second-year soldier in War College, M is very protective of our Unit and any witch in their coven.

Aguayo is Nicte, someone from Alder’s past who helped shape her into who she is now.”

Motherland: Fort Salem will premiere its new season on June 22.

What do you think? Are you a fan of the Motherland: Fort Salem TV series on Freeform? Do you plan to watch season two next month?

Yes I will be watching. This is a show my mother n I started to watch .now that she had passed I will continue watching.

As long as it has not been farmed out to satellite networks/services then, yes, most definitely, both Nadia and I will certainly be watching.

If it has been farmed out … then, sadly no … the Series can chalk up two more to several thousand, passionate Fans, who can no longer receive broadcast.

Will watch for sure!