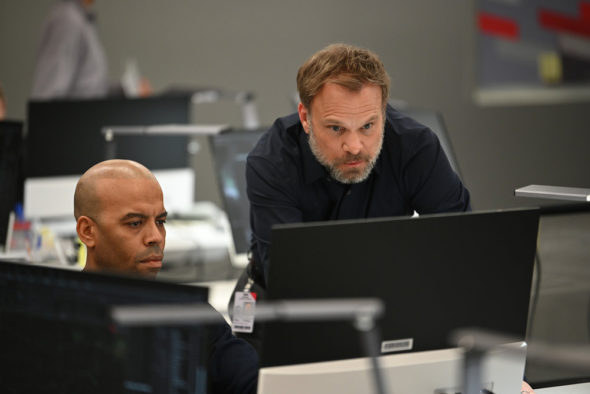 What strange things will happen in the first season of the Debris TV show on NBC? As we all know, the Nielsen ratings typically play a big role in determining whether a TV show like Debris is cancelled or renewed for season two. Unfortunately, most of us do not live in Nielsen households. Because many viewers feel frustrated when their viewing habits and opinions aren’t considered, we invite you to rate all of the first season episodes of Debris here.  *Status Update Below.

An NBC science-fiction drama series, the Debris TV show stars Jonathan Tucker, Riann Steele, Norbert Leo Butz, and Scroobius Pip. The story begins as mysterious wreckage starts falling from the sky. A secretive international agency named Orbital is tasked with figuring out what the wreckage is, where it came from, and most importantly — what it can do. British MI6 operative Finola Jones (Steele) and American CIA agent Bryan Beneventi (Tucker) are partners but they have very different styles. However, they have no choice but to trust each other as they track down the debris scattered across the Western Hemisphere. Each fragment has unpredictable, powerful, and sometimes dangerous effects on the everyday people who find it. They must race against time as shadowy outside forces seek these objects for nefarious purposes.

What do you think? Which season one episodes of the Debris TV series do you rate as wonderful, terrible, or somewhere between? Do you think that Debris should be cancelled or renewed for a second season on NBC? Don’t forget to vote, and share your thoughts, below.

So disappointed it was canceled

Debris was such an innovative new show. I can’t believe it was cancelled. I’m hoping another network will pick it up.

Debris is a hidden gem. If you don’t know about it it’s because it didn’t get much publicity. Publicity is necessary for knowing about something. This show wasn’t given a fair chance. NBC is my primary channel next to HGTV and WE. I’ve been turning my friends on to Debris and they are as hooked as I am. It’s shameful to cancel this show when it has so much more to offer.

Debris is the best new drama, Sci-Fi show created in many years! With a feel like X-Files it sucks you in and leaves you wanting more! This is the only show I watch and I’m on pins and needles waiting for more!! I would like to petition the network to reconsider this show. Originally the show did not get much publicity and that could
Be the reason for the poor ratings. This show is so clever and interesting. Snd I want more