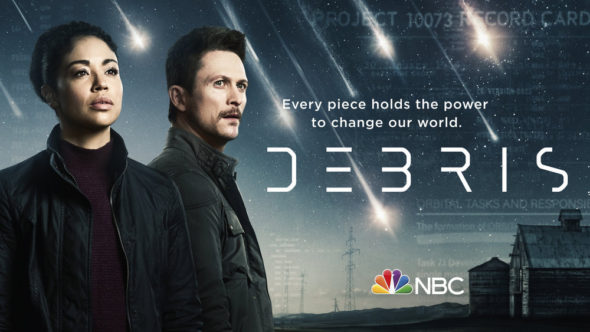 Due to low ratings, many science-fiction shows don’t last very long on network television. However, this one feels like it might be different. Will Debris be cancelled or renewed for season two on NBC? Stay tuned.  *Status Update Below.

A science-fiction drama series, the Debris TV show stars Jonathan Tucker, Riann Steele, Norbert Leo Butz, and Scroobius Pip. The story begins as mysterious wreckage starts falling from the sky. A secretive international agency named Orbital is tasked with figuring out what the wreckage is, where it came from, and most importantly — what it can do. British MI6 operative Finola Jones (Steele) and American CIA agent Bryan Beneventi (Tucker) are partners but they have very different styles. However, they have no choice but to trust each other as they track down the debris scattered across the Western Hemisphere. Each fragment has unpredictable, powerful, and sometimes dangerous effects on the everyday people who find it. They must race against time as shadowy outside forces seek these objects for nefarious purposes.

What do you think? Do you like the Debris TV series on NBC? Should it be cancelled or renewed for a second season?

it had great potential to become modern x-files. it failed on all accounts, cast was meh, the actress is always playing the same struggling but tough woman, cannot take her seriously.
episodic plots were repetitive, seasonal arc was boring and didn’t have any culmination.
show didn’t know what it wants to be.

I enjoyed Debris and watched it weekly with my family. It feels like the deep, thought-provoking shows fail to get the viewership and are cut. I don’t know whether to invest in any future releases on the chance that I will become attached to a show that is deemed cancel-worthy. It’s sad. I wish the writers and actors the best of luck in their future endeavors.

Definitely better sell it to another Network so we can at least get the gist of what’s going on. Nobody should ever start something they never intend to finish. There are a lot of science fiction fans out there that are denied by reality garbage. There’s one reason why I started streaming everything and that was because of reality garbage that it has nothing to do with reality at all.

Mary Kent
Reply to  The source

I want another network to pick this grade A series. Leave it to NBC to fall behind the times and cancel one of the best SyFi shows.

So disappointed Debris is cancelled! It was an intelligent show with great actors!

I am sorry that NBC chose to cancel “Debris”,. I hope that they would reconsider it for the spring season or that it take pick up by another network. Debris is a excellent program and is well written and the the cast is excellent

OK. I’ve been watching this show for weeks. Usually love science fiction series. I have forced myself to watch thinking it would “click”. Nope. Bored to tears and never want to hear the word debris again. Going to un-DVR this “garbage”!