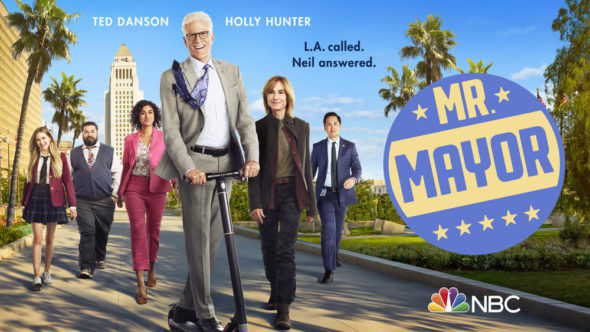 Airing on NBC for four seasons, The Good Place was a solid performer in the ratings for its entire run. Now, Ted Danson is starring in a new comedy for the peacock network. Will it be as successful? Will Mr. Mayor be cancelled or renewed for season two? Stay tuned.  *Status Update Below.

A single-camera comedy series, the Mr. Mayor TV show stars Danson, Holly Hunter, Vella Lovell, Mike Cabellon, Kyla Kenedy, and Bobby Moynihan. The story follows Neil Bremer (Danson), a retired and wealthy businessman who runs for mayor of Los Angeles for all of the wrong reasons — just to prove that he’s “still got it.” Once he wins, Neil has to figure out what he stands for and gain the respect of his staff and his biggest critic and political rival, Arpi Meskimen (Hunter). At the same time, he also wants to connect with his rebellious teenage daughter, Orly (Kenedy).

2/26 update: You can see the latest night’s ratings in context.

What do you think? Do you like the Mr. Mayor TV series on NBC? Should it be cancelled or renewed for a second season?

Please keep Mr. Mayor, I am a woman of color, and enjoy this show so much, it could use a litttle flavor perhaps Wanda Sykes, or the cast of Reno 911 as his beleagured Police Department, they are funny and brought joy to everyone, Thomas Lennon is so funny. Mr. Mayor is better than what CBS offers on Monday Bob loves Abischola is not believable or funny, no chemistry between the 2 actors. We need more laughs, please!!

Please don’t cancel yet…i feel rhat the comedic aspect 9f program has only been seeded and when it blooms this will be one of the funniest shows put there!!

Please renew Mr Mayor. Hilarious,and one of the best written and acted shows on tv.

The only character I like is the one playing Vice Mayor.

Please cancel this horrid show. It has nothing that made the The Good Place a hit. Not to mention Ted Danson as a father of a teenager is totally unbelievable.

Amazing. This show seems to be getting better/funnier!

Really good! Very funny and INTELLIGENT, as one would expect from Fey and Carlock. The ratings so far are enough to keep it going, and I for one am very happy about that.

This show’s debut provoked not one but TWO hearty laughs from my body. So thank you once again, Tina Fey. A bright spot in the current dismal TV landscape. I will happily continue to watch.