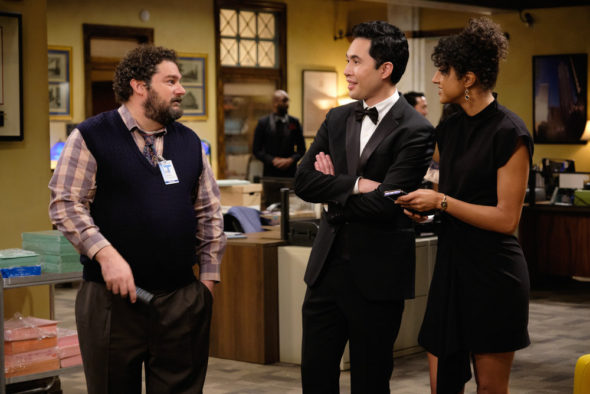 Will Neil stay in office for all of the first season of the Mr. Mayor TV show on NBC? As we all know, the Nielsen ratings typically play a big role in determining whether a TV show like Mr. Mayor is cancelled or renewed for season two. Unfortunately, most of us do not live in Nielsen households. Because many viewers feel frustrated when their viewing habits and opinions aren’t considered, we invite you to rate all of the first season episodes of Mr. Mayor here.  *Status Update Below.

An NBC single-camera comedy series, the Mr. Mayor TV show stars Ted Danson, Holly Hunter, Vella Lovell, Mike Cabellon, Kyla Kenedy, and Bobby Moynihan. The story follows retired and wealthy businessman Neil Bremer (Danson) who runs for mayor of Los Angeles for all of the wrong reasons — just to prove that he’s “still got it.” Once he wins, Neil has to figure out what he stands for and gain the respect of his staff and his biggest critic and political rival, Arpi Meskimen (Hunter). At the same time, he also wants to connect with his rebellious teenage daughter, Orly (Kenedy).

What do you think? Which season one episodes of the Mr. Mayor TV series do you rate as wonderful, terrible, or somewhere between? Do you think that Mr. Mayor should be cancelled or renewed for a second season on NBC? Don’t forget to vote, and share your thoughts, below.

Absolutely Love Mr. Maror! It is just so hilarious with off the wall humor & and the simplicity is so refreshing. A kind or funny for everyone. Unlike many other comedy’s, Mr. Maror is capable of inflicting on ones self a full on belly laugh that may also result in side pain due to excessive laughter. Definitely keeps me coming back for more! Always can’t wait to see the next episode! NBC definitely has quite a few of my most favorite shows.. Kudos.. Love & Thanks!

Please, please renew – Danson is hilarious in this role. Not your typical mainstream sitcom. Watch more than just the pilot or one single episode, it def grows on you!

Not funny. I was hoping it was going to be. Just can’t get into it. It doesn’t keep my interest. I’ll pass on it.

Love Ted Danson but Bobby Moynihan has to go

Cute, but kind of slow moving.

I really looked forward to this show because I am a big fan of Ted Danson. I was hoping that his humor would be like it was on Cheers. I watched the first show and didn’t even crack a smile. Started to watch the second and it was so bad that I turned it off. For Ted’s sake, I hope the writers do much better, fast. If not, it will be bye bye time. Get some better writers!

Mr. Mayor is not “Cheers” and has it’s own brand of comedy. Danson is awesome in this role. Every episode has a hilarious topic, being ridiculous is the name of the game 🙂

Not sure yet. Slow moving show so far

I agree with Mia. I hope it gets better because I’m a fan of Ted Danson.