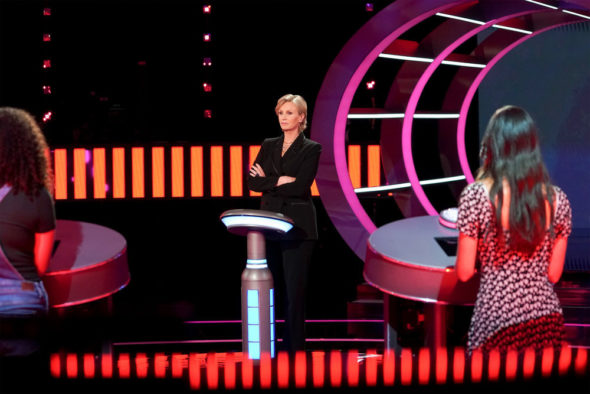 How much cash will NBC give out in the first season of the Weakest Link TV show? As we all know, the Nielsen ratings typically play a big role in determining whether a TV show like Weakest Link is cancelled or renewed for season two. Unfortunately, most of us do not live in Nielsen households. Because many viewers feel frustration when their viewing habits and opinions aren’t considered, we invite you to rate all of the first season episodes of Weakest Link here. *Status Update Below.

An NBC revival of the 2000’s primetime and syndicated game show that was hosted by Anne Robinson, Weakest Link pits contestants against one another while also forcing them to work together in a trivia contest. This new version is hosted by Jane Lynch. In each episode, eight contestants enter the studio as total strangers but must work together to bank the maximum amount of prize money available in each round. At the end of each round, contestants vote to eliminate the fellow contestant they consider to be the “Weakest Link” in the chain. The contestant who receives the highest number of votes leaves the game as the host utters the iconic phrase, “You are the Weakest Link. Goodbye.” By the end of the episode, a single player can win up to $1,000,000.

What do you think? Which season one episodes of the Weakest Link TV series do you rate as wonderful, terrible, or somewhere between? Do you think that Weakest Link should be cancelled or renewed for a second season on NBC? Don’t forget to vote, and share your thoughts, below.

*1/26/21 update: Weakest Link has been renewed for a second season on NBC.

Best game show on TV. Jane Lynch is great as the host. Please renew for a long time.

I loved this show when it was on years ago and I love it even more now with Jane Lynch!! She’s more funny and less rude! This is and always will be my favorite game show! It’s the only show on tv that I never miss!! Keep up the great work!! Just please keep giving us new episodes and not a bunch of reruns!

I agree with Pamme,

Jane Lynch is a great game show host, because she is a good ad libber. She, however, is “too nice” hosting the revised The Weakest Link. It seemed to me that she was not stern, or “mean,” enough, as was the host of the original Weakest Link game show.